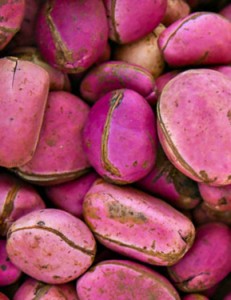 Medicinal plants have become mainstay and will continue to play significant roles in influencing the livelihood of human beings. They also tend to play tremendous roles towards pharmaceutical discoveries and drugs creation for human consumption. It is apparent that the past years have recorded an increased structural diversity of molecules present in the plant kingdom from which some of the vital components and compounds for new drugs productions have emanated. Some of these new drugs discoveries have actually exhibited major vital impacts on human beings and more are yet to be discovered. One of such plants is kola nut.

Kola nut (Bissy nut) belongs to the family of Sterculiaceae and was introduced to Jamaica from Africa. Kola nut is a tropical plant that is original from the African continent with approximately 20-40 species however, the most common kola nuts species are the Cola acumulata and Cola nitida. Kola nuts are also economic crops in places such as Malaysia, Caribbean Islands, Mauritius and Sri Lanka. Reports have recorded an increase in demand for kola nuts by the pharmaceutical, food and drink industries over the past years.  Kola nut is a vital economic crop in Africa especially in Nigerian where they are mainly cultivated and traded for both consumption, medicinal and industrial purposes.

The fruit has a characteristic capsule-like shape that contains fleshy, unevenly shaped seeds. These seeds can be reddish, pinkish or whitish in colour when fresh but normally turns brown and strong when dried. Kola nuts have a characteristic bitter and harsh taste that usually turns off some people away from  eating them. However, most people that are already acquainted with the taste care very less about the astringent taste. The use of kola nut as a stimulant has become mainstay in many African nations who believe that this fruit is capable of keeping them awake for several hours once eaten. Although many individuals uphold this claim, yet some are very adamant about the stimulating abilities of kola nuts.

Studies report that Nigeria cultivates and trades up to 70% of the total world production of kola nuts with cola nitida being the more prevalent specie for international trades. Fresh Cola acuminate nuts are usually chewed raw while the hard dried ones are used for pharmaceutical and industrial purposes. Kola nut is of great significance especially during traditional rites, marriage ceremonies, religious ceremonies, naming ceremonies, social, burial ceremonies, ritual rites, festivals such as new yam festivals and certain traditional events.  Kola nut is also a vital gift usually offered to visitors as a mark of acceptance or welcome to a family or gatherings. Industrially, kola nuts are used as stimulants and flavours for the production of alcoholic drinks especially the Cola nitida specie. Kola nuts are also valuable for the production of orthodox drugs such as; vincristine and vinblastine.

Kola nut can be used for treating cancer due to its chemo-preventive and anti-cancer properties. The concern over the alarming increase in the rate of cancer attack on individuals has called for an increased method of care and treatment to curb this menace. However, certain orthodox drugs and chemotherapeutic treatments given to sufferers appear to have several side effects. This issue resulted in the need for a more natural approach for treating cancer, which makes kola nut very important.

Drink industries use kola nut extracts for producing drinks such as sports energy drinks due to the high flavourful and caffeine content of the nuts.

The presence of theobromine and caffeine in kola nut, which are very strong stimulants help to boost physical energy, maintain alertness, and increase sensitivity. The nutrient density of kola nut is higher when compared with that of coffee and caffeine.

Kola nut extracts can be used for treating digestive disorders and stomach pains.

Researchers agree that kola nuts contain compounds that are capable of neutralizing poisons.

Small portion of kola nut can be chewed to treat migraine, however there are some claims that excess consumption of this nut can invariably cause headache.

Kola nut extracts can be used for treating inflammatory disorders such as gout and rheumatism.

Kola nut extracts can be used for treating pneumonia and typhoid fever.

Kola nut can be used for treating diarrhea and stopping loose stools.

Studies reveal that kola nut has antimicrobial properties that can fight against bacteria and microorganisms such as E. coli, Bacillus subtilis, Staphylococcus aureus etc.

HI THERE.. IT IS GREAT TO MEET YOU.. Cooking is a passion I developed at a very tender age from my mum and this online platform is where I aim to share and grow knowledge in all things cooking.
View all posts by Blessing Okpala →
Spicy Chilli Chicken
AYAMASE STEW