CASHEW AND ITS AMAZING BENEFITS 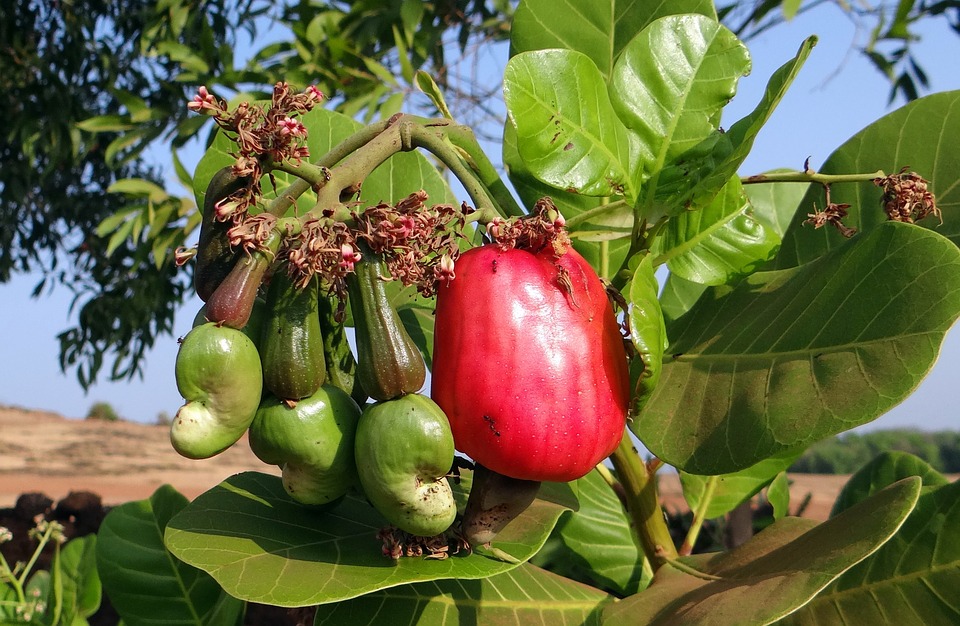 From time immemorial, agriculture has been a crucial sector in the economy of most countries especially in the area of growing cash crops like palm kernels, rubber, cocoa, coffee, cotton, peanuts and cashew. These cash crops contribute immensely to the economy of these countries and one of such crops that I've picked interest to discuss with you is cashew. Apart from being a cash crop, cashew is also very essential due to its numerous benefits to our health. Being among the popular tree nuts in the world, cashew continues to draw huge attention on a daily basis. But despite its popularity, it is just surprising that most people are still ignorant of the amazing health benefits and uses of this distinctive plant. Before going into the health benefits and other uses of cashew, here is a brief description of this valuable plant that will be of interest to you.

Cashew, which is also known as marañón in Central America and botanically known as Anacardium occidentale L. belongs to the Anacardiaceae family. The Anacardiaceae family comprises of other fruit trees such as African plum (Sclerocarya birrea), sumach (Rhus), mango (Mangufera) and pistachio. Cashew tree is a tropical evergreen tree that is originally from North-east of Brazil before spreading to other parts of the world such as Africa and Asia. The tree can grow approximately 20m in height under conducive weather conditions however, the growth stalls during harsh climatic condition. The leaves measure between 10 to 22 cm long and 2-15 cm wide and are slightly red or light green while young but tend to be dark green in colour on maturity. The tree produces the cashew apple (flesh) and the cashew seeds that contain the cashew nuts.

The tree can grow and survive in diverse soil types with harsh climatic conditions where other trees could fail to grow. Both the cashew seeds (nuts) and cashew apples are edible and the roots, stems and leaves are often used in folk medicines for producing several herbal medicines for tackling diseases. The cashew apple has juicy pulp that can be eaten fresh or used for producing fruit drinks. Some cashew species produce cashew apples that are very sweet and tasty while some can taste so sour and unpleasant. It is important to note that eating sour cashew apples can cause itching sensations on the throat so check well before consuming. 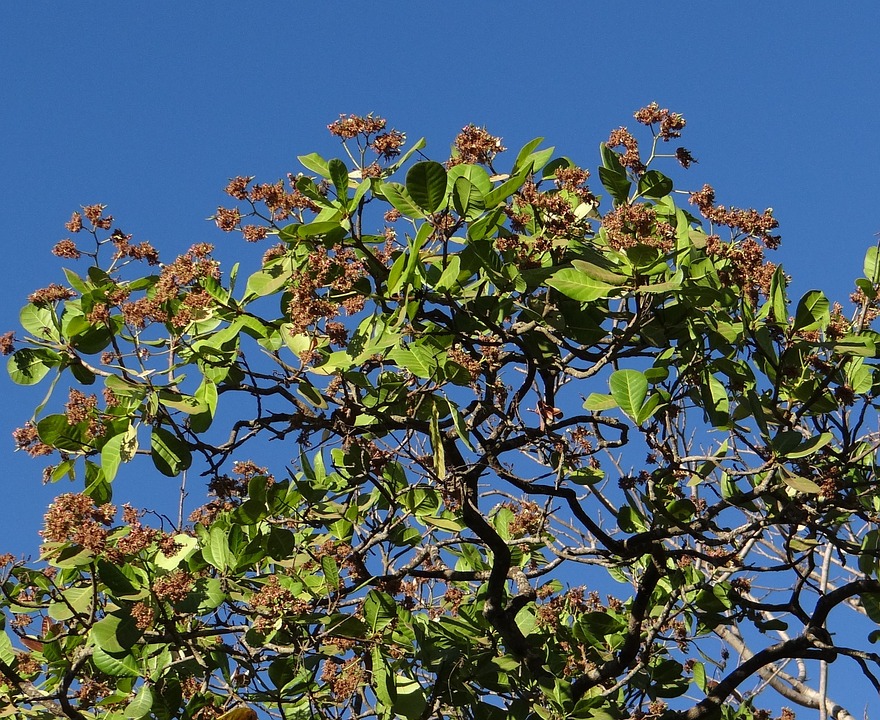 The leaves are distinguished by their ovate, spiral, leathery appearance with smooth margins. The fruit consists of outer shell (epicarp), which is the outermost layer of the pericarp, the inner shell (endocarp), kernel and testa. The cashew apple represents almost 90% of the fruit and it is notable for its high content of phenolic and ascorbic acid. The cashew apple usually ripens into reddish, yellowish or light green/yellow fruit, its drupe first develops on the tree before the pedicel stretches to transform into the cashew apple. The cashew seed has a characteristics heart-shape appearance and it is usually processed to yield the tasty edible nuts. The seed is enclosed in a double shell that contains toxic allergenic phenolic resin, anacardic acid that can irritate the skin. Roasting destroys this toxic chemical however, this must be done outdoors as the smoke from the cashew shell contains urushiol droplets that are capable of irritating the lungs. Once the seeds have been roasted, they are then broken for the nuts to be collected. The nuts are the most popular part of the cashew tree and they are usually consumed plain or used for preparing assorted dishes and even cashew oil.

This is a dark yellow oil that is normally obtained from the cashew nuts and used for cooking. Cashew oil is usually produced from cold pressing while processing the cashew nuts.

The cashew apple is rich in essential nutrients and it is highly valuable because it contains 5 times more vitamin C than citrus fruits such as orange. It contains between 10% to 38% protein, 13% dietary fiber, 11% carbohydrates, less than 19% of dietary minerals (phosphorus, copper, manganese) and between 79 to 110% of magnesium. It is also an excellent source of vitamin K, potassium, thiamin, iron, selenium, zinc, vitamin B6, amino acids, fructose, beta-sitosterol and glucose. 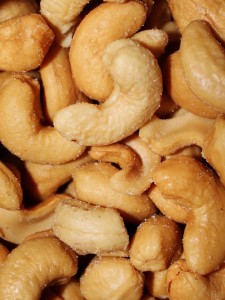 The cashew apples can be eaten fresh or used for preparing fruit juice, cashew smoothie, astringent fruit drinks, alcoholic drinks, vinegar, liquor, jams and chutneys. The astringent cashew taste is as a result of the presence of waxy layer on its skin and this contains a chemical known as urushiol. Some countries remove this astringency by steaming, boiling the fruit in water for at least 5 minutes before rinsing in cold water. The astringency can also be removed by soaking the cashew apples in gelatin or turmeric water for 5 minutes before washing in cold water.

In Spain, cashew (marañón) is normally cooked with sugar and water for a long period of time to produce sweet brown dessert known as dulce de marañón. Roasted and salted cashew nuts are popularly known as kacang mede or kacang mete in Indonesia while the cashew apple is known as jambu monyet. In Mozambique, cashew and potatoes are used for making a special cake known as bolo polana.

Antibacterial Properties
Due to its antibacterial properties, cashew is very active against bacteria and as such can be used for destroying bacteria, suppressing their growth and impeding their tendency to reproduce. It is important to note that bacteria are powerful microscopic organisms that can be dangerous or beneficial. Dangerous ones cause infection while the beneficial ones are essential for decomposition and fermentation processes.

Treatment of Venereal Diseases
Cashew leaves are used in folk medicine for treating venereal diseases, which is a disease condition gotten from sexual intercourse. It can also be used for treating genital diseases. Anti-diabetic Properties Researchers reveal that cashew seed extract significantly stimulates blood sugar absorption by the muscle cells. As a result, it regulates blood sugar level and prevents insulin resistance in diabetics patients. This is attributed to its anti-diabetic properties. Anti-oxidizing Properties Cashew contains anti-oxidizing properties due to its rich source of phenolic compounds and ascorbic acid. Dermatological Care The cashew leaves, oil and roots can be used for producing herbal soap for treating skin diseases such as rashes, itches, eczema, psoriasis and syphilis-related skin disorders. Treatment of Gastrointestinal Diseases The extracts from the bark, stems and leaves of the cashew tree can be used for treating gastrointestinal diseases such as colonic pain, diarrhea, dysentery and dyspepsia (indigestion). Treatment of Scrofula Cashew extracts can be used for preparing herbal medicines for treating scrofula, which is a disease condition marked by glandular swellings (a form of tuberculosis). Anti-inflammatory Properties Cashew tree products contain effective anti-inflammatory properties and as such can be used for reducing inflammation, swelling and body pain. Antiviral Properties Cashew leaves extracts offer protection against viruses and as such can be used for preparing herbal medicines for treating cold, bronchitis and cough. Treatment of Leishmaniasis The bark, root and leaves extract can be used for treating leishmaniasis, which is a tropical and subtropical disease caused by leishmania. Leishmaniasis is mainly transmitted through the bite of sandflies and it affects either the internal organs or the skin. Treatment of Impotence Studies reveal that cashew extracts can be used for treating impotence, which is a sexual dysfunction associated with failure to develop or maintain an erection of the penis during sexual intercourse. Animal Feed The cashew pulp obtained after juice extraction from the apple can serve as animal feed. 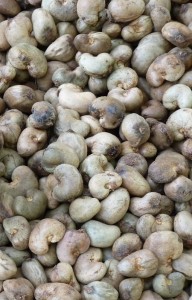 Erosion Control
The cashew tree is drought resistant thus can withstand severe weather conditions. Due to its resistant nature, it is usually planted for controlling erosion. It produces substantial amount of litter that is beneficial for reducing soil erosion. Moreover, the trees normally grow in rows thus making them useful as windbreaks.

How to Process Cashew Nuts
Processing cashew nuts involves the following steps
1. Collection and Sorting - The seeds are first collected and sorted properly.
2. Cleaning - The sorted seeds are thoroughly cleaned and soaked for few hours. Fresh seeds can be roasted without soaking however, the dried ones are best soaked before roasting.
3. Roasting - After soaking, the seeds can now be roasted until done.
4. Shelling - The roasted cashew seeds are then shelled and separated from the cashew nuts.
5. Peeling - The separated nuts are further processed by peeling the nuts and removing the light outer coatings. Once peeled, the nuts can then consumed or used for any other culinary purpose of choice. Cashew Allergy
Some people are allergic to cashew apples and cashew nuts. Such allergic reactions can be life-threatening and necessitate quick medical intervention should there be any. The allergic nature of cashew is due to its constituent of gastric and soluble oxalates triggered mainly by the proteins in the tree nuts.
DISCLAIMER
This post is for enlightenment purposes only and should not be used as a replacement for professional diagnosis and treatments. Remember to always consult your healthcare provider before making any health-related decisions or for counselling, guidance and treatment about a specific medical condition.
REFERENCES
1] Agbongiarhuoyi Anthony E., Aigbekaen E. O. and Akinbile L. A. (2008), Awareness of Cashew products potentials and market information among farmers in Kogi state, Nigeria, Journal of Agricultural and Biological Science, VOL. 3, NO. 4, pp. 10-11.
2] Alobo, A. P., Agbo, B. N. and Ilesanmi, S. A. (2009), Physicochemical and functional properties of full fat and defatted cashew kernel flours, International Journal of Food Science and Technology. 44, pp. 581–584.
3] Aremu, M.O., Olonisakin, A., Bako, D. A. and Made, P. C. (2006), Compositional Studies and Physicochemical Characteristics of Cashew Nut (Anarcdium occidentale) Flour Pak. Nutry 5: pp. 328-329.
4] Fagbemi, T. N. (2008), The influence of processing techniques on the energy, ash properties and elemental composition of cashew nut (Anacardium occidentale
Linn). Nutrition and Food Science. 38(2), pp. 136–142.
5] Hammed, L.A. and Adedeji, A. R. (2008), Incidence and control of twig die-back on young cashew in Ibadan (Southwestern Nigeria). Agricultural Journal, 3 (3): pp. 171-173.
6] Irtwange, S. & Oshodi, A. (2009), Shelf-life of Roasted Cashew Nuts as Affected by Relative Humidity, Thickness of Polythene Packaging Material and Duration of Storage Research, Journal of Applied Sciences, Engineering and Technology, 1, pp. 149-152.
7] Nandi, B. K. (1998), Cashew nut: nutritional aspects, In: Integrated production practices of cashew in Asia and the Pacifics. Bangkok, Thailand. Papademetriou, M. K. and E. M. Herath (Eds.), pp:74-79.
8] Ogungbenle, H. N. (2014), Chemical, functional properties and amino acid composition of raw and defatted cashew kernel. Am. Chem. Science Journal, 4(3), pp. 348-354.
9] Oladapo, A. S., Abiodun, O. A., Akintoyese, O. & Adepeju, A. 2014. Effect of Packaging Materials on Moisture and Microbiological Quality of Roasted Cashew Nut (Anarcardium Occidentale L). Research Journal in Engineering and Applied Sciences 3(2), pp. 98-101.
10] Paramashivappa R. et al,(2001), Novel Method for Isolation of Major Phenolic Constituents from Cashew (Anacardium occidentale L.) Nut Shell Liquid J. Agric. Food Chem., 2001, 49 (5), pp. 2548–2550.
11] Ryan, E., Galvin, K., O’Connor, T. P. Maguire, A. R. and O’Brien, N. M. (2006), Phytosterol, tocopherol and squalene content of brazil, pecan, pine, pistachio and cashew nuts. International Journal of Food Sciences and Nutrition 57, pp. 219-225.
12] Sarangib (2014) Cashew tree and nuts, Accessed online https://pixabay.com/en/cashew-tree-sadhankeri-india-tree-277968/, accessed date 10/12/2015.
13] Thivavarnvongs, T., Okamoto, T. and Kitani, O. (1995a), Development of compact sized cashew nut shelling machinery (Part 1). Synthesis of effective manual and semi-automatic shelling methods. Journal of the Japanese Society of Agricultural Machinery. 57(2), pp. 57–63.

HI THERE.. IT IS GREAT TO MEET YOU.. Cooking is a passion I developed at a very tender age from my mum and this online platform is where I aim to share and grow knowledge in all things cooking.
View all posts by Blessing Okpala →
SPINACH SAUCE WITH PLANTAINS
35 INCREDIBLE BENEFITS OF RICINODENDRON HEUDELOTII (NJANGSA)