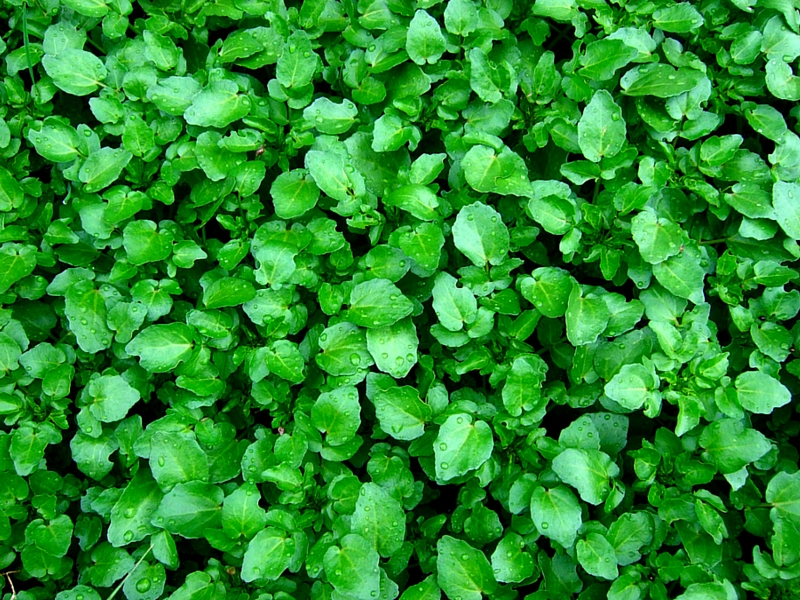 Several plants and herbs have been classified as functional foods and one of such plants is watercress. This green vegetable is regarded as a functional food because it contains several health promoting properties. Functional foods offer similar benefits as medicines, which suggests the need to regularly include them in our diets. Watercress is a fast-growing semi-aquatic or aquatic plant that is botanically known as Nasturtium officinale.

It is native to America, Asia and Europe and different countries have different names for it such as; water cushie, green watercress, town cress, water crishes, bronkors, karsun mehi, Kreson, nilofar, beler, halim, ajila, cai, Ukhwaningenila, xi yang cai, waterkers,biolar, piriyaa-haalim,tapsoy, pakhuy, jembrak, saladi, berwr dwr. Watercress belongs to the family of Brassicaceae otherwise known as cabbage family. It is botanically equivalent to mustard, radish, wasabi and garden cress due to their similar tangy flavour. It usually thrives mainly in streams, springs, clear water and open-running waterways. It is a leafy dark green herb that is characterised by a short shelf life of approximately 7 days. It is distinguished from other plants by its hollow stems that float on the water surface. 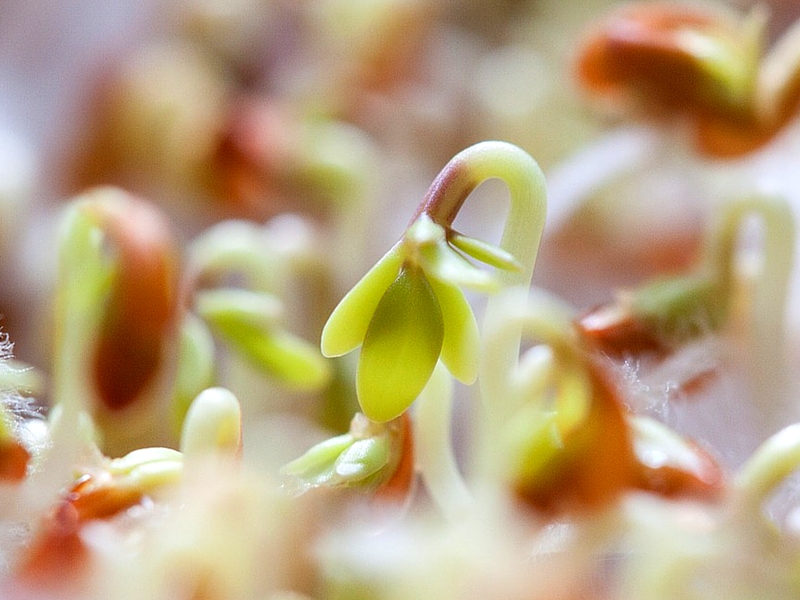 Researchers also reveal that watercress seeds contain glucosinolates, which are sulphur-containing glycosides present in brassicaceous plants. These glucosinolates can be broken down enzymatically by plant myrosinase or non-enzymatically to basically produce simple nitriles and isothiocyanates.

Several studies reveal that the high medicinal and therapeutic nature of watercress is due to its high nutritional values. Watercress is an excellent source of essential vitamins and minerals such as; vitamin A, vitamin K, dietary fiber, protein, beta-carotene, iron, pantothenic acid (B5), sodium, vitamin E, iodine, folate (B9), lutein zeaxanthin, magnesium, calcium, thiamine (vitamin B1), riboflavin (B2), potassium, vitamin B6, folic acid, phosphorus, vitamin C, omega-3 fatty acids (Hexadecatrienoic acid) and manganese.  Watercress is also an excellent source of Phenethyl Isothiocyanate (PEITC), which is a naturally occurring compound found in some cruciferous vegetables.

Culinary Purposes
Watercress can be eaten fresh as a green vegetable or can be added in salads. It can also be used for preparing stews and soups. But in this case, it is advisable not to overcook the watercress so that it doesn’t lose its nutrients. Water cushie can be juiced or used for making smoothies. It can also be used for preparing watercress sandwiches or used for garnishing main meals. The seeds can be ground and used as an alternative for mustard seeds powder.

Chemoprotective Properties
Boyd et al., (2006) investigated the potential chemoprotective effects of crude watercress extract on three vital stages in carcinogenic process; initiation, proliferation, and metastasis (invasion) based on established in vitro models. They used HT29 cells to examine the protective effects of the watercress extract on DNA damage and the cell cycle. Even though the extract was not genotoxic yet it inhibited DNA damage caused by two of the three genotoxins (hydrogen peroxide and fecal water) used. This indicates the ability to inhibit initiation process.
The extract also caused the cells to accumulate in the S phase of the cell cycle thus indicating possible cell cycle delay. The extract significantly inhibited invasion of HT115 cells through matrigel. The researchers also carried out component analysis in other to unravel the main phytochemicals found in watercress leaves and the crude extract. Conclusively, Boyd et al., (2006) proved that watercress extract significantly protects against the three stages of the carcinogenesis processes examined. The Phenethyl Isothiocyanate (PEITC) in watercress inhibits tumor growth.
Treatment of Cough
Some countries like China use watercress for treating phlegm and dry cough. Watercress soothes the throat, inflamed lungs and mouth.
Dermatological Care
Watercress leaves can be used for preparing herbal cosmetics for treating skin diseases such as blotches, blemishes, spots and freckles. Due to its high sulphur content, watercress is also suitable for treating eczema.

Oral Cancer Treatment
Watercress seed is an excellent source of glocunasturtiin, which when broken down produces 2-phenethyl isothiocyanate (PEITC). Due to its rich constituent of dietary PEITC (Phenethyl Isothiocyanate), researchers agree that the PEITC can help to inhibit carcinogenesis. Phenethyl Isothiocyanate (PEITC) is a naturally occurring compound found in some cruciferous vegetables.
Ting et al., (2000) study shows that PEITC plays an integral role in inhibiting tobacco-related tumorigenesis found in human oral cancer. Rajalakshmi and Agalyaa (2010) also support that the herb can be used for treating oral cancer. Oral cancer can be symptomized by a sore in the mouth that fails to heal. Oral cancer is caused by excessive alcohol use and tobacco consumption. Consuming alcohol and tobacco excessively adversely affects the lips, mouth, jaws, throat and lungs thereby causing cancer.
Aids Easy Digestion of Food
Being an excellent source of dietary fiber, watercress can be consumed to aid easy digestion thereby preventing constipation and flatulence.
Anti-oxidizing Properties
Alfredo et al., (2013) investigated the phytochemical composition and the antioxidant properties of watercress. The study showed that watercress is an excellent of antioxidant compounds such as polyphenols. The antioxidant compounds offer protection against oxidative damage and help to scavenge reactive oxygen species.
Anti-fungal Properties
Nikan and Khavari (2014) investigated the anti-fungal effect of the watercress extract on the growth of Fusarium solani, which is the causal agent of potato dry rot. The experiment shows that the alcoholic extract of watercress is effective for inhibiting mycelial growth of Fusarium solani. This suggests that watercress is suitable for use as a natural material for producing fungicides.
Minimizes DNA Damage
Studies reveal that daily inclusion of watercress in our diets helps to significantly minimize and resist DNA damage to blood cells caused by free radicals.
Scurvy Treatment
Watercress can be used for treating scurvy because it is an excellent source of vitamin C. Scurvy is a disease condition caused as a result of vitamin C deficiency. This is characterised by the opening of previously healed wounds and swollen bleeding gums.
Diuretic Properties
Watercress plant can be used for treating and promoting urination.
Treatment of Stomatitis
Bullita et al., (2008) agree that watercress is suitable for treating stomatitis.
Prevents Osteoporosis
Including watercress regularly in your diet helps to prevent the onset of osteoporosis.
Hypertension Treatment
Watercress seeds can be used for treating hypertension.
Blood Purifier
Fresh watercress herb can be juiced and drank for purifying the blood.
Aphrodisiac Properties
Watercress is aphrodisiac in nature thus very useful for stimulating sexual desires.
Promotes Hair Growth
Watercress can be squeezed and used as a hair tonic for promoting hair growth.
Treatment of Lymphatic Swellings
Watercress leaves can be pound and used for treating lymphatic swellings.
Protection Against Cardiovascular Diseases
Watercress serves as a cardioprotective agent for protecting against cardiovascular diseases. It strengthens and promotes the healthy functioning of the heart.
Treatment of Low Blood Pressure
Watercress can be combined with spinach and carrots for treating low blood pressure
Fights Anaemia
Due to its high iron content, watercress can be used for fighting anaemia. Anaemia is a health condition characterised by deficiency of red cells or haemoglobin in the blood thus leading to weariness and an unhealthy pale appearance. 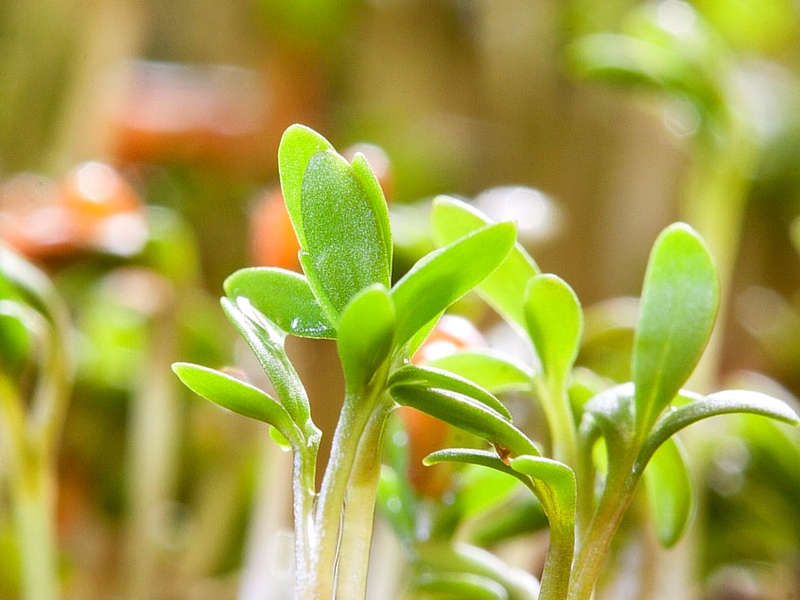 How to Grow Watercress

Watercress performs well in cold water where it forms clusters along the edges of slow moving streams and riverbanks. Its white, thread-like roots anchors to the bottom of stream beds while it grows. To plant watercress, place the seeds in a pot containing a mixture of sand, water, filtered wood humus and ground limestone. It is preferable to include limestone while planting watercress since it performs better on calcium.

Remember to always keep the growing watercress seedlings wet. Place the seedlings close to an aerated place with partial sunlight spot. Once the plants are big enough to be transplanted, transfer them to a suitable place along the banks of a clear water or stream. Alternatively, you can transplant them to bigger pots containing wet soil mixture, set in a tray of water. Remember to change the water regularly. When the watercress is ready for harvest, refrain from pulling up the entire plant. Always pluck off the ones close to the water surface so that the ones beneath the water surface can sprout out more vegetables.

Watercress normally grows in streams and riverbanks, which can be quite polluted with microorganisms such as salmonella. If you are consuming the cress raw, endeavour to wash it thoroughly with salt and clean water. Afterwards, soak the thoroughly washed cress leaves and young shoots in a halazone solution. Halazone is a white crystalline powdery acid that serves as a disinfectant for drinking water.

To use the halazone, add two tablets in a quart of water then allow it to stand for at least half an hour before soaking the watercress in the solution. It is highly recommended to soak both the homegrown and store bought watercress in halazone solution in other to remove pollutants as well as destroy any potential organisms, impurities and parasites.

HI THERE.. IT IS GREAT TO MEET YOU.. Cooking is a passion I developed at a very tender age from my mum and this online platform is where I aim to share and grow knowledge in all things cooking.
View all posts by Blessing Okpala →
AWESOME BENEFITS OF ARUGULA
20 KEY BENEFITS OF OGBONO IRVINGIA GABONENSIS