FINGERROOT AND ITS EXCEPTIONAL BENEFITS 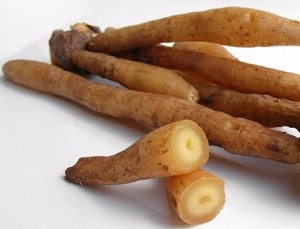 In this day and age, much attention is drawn towards the regular use of plants, herbs and spices in an attempt to benefit from all their medicinal, therapeutic and culinary attributes. There are countless of these beneficial nature's gifts but the question is how often do you bother to tap into them?

There is a great need for us to know about these essential plants, herbs and spices as they are quite useful for preventing and treating several diseases. This post sheds light on some important information you definitely need to know about one of these beneficial plants known as fingerroot. Fingerroot, which is botanically known as Boesenbergia rotunda, Curcuma rotunda L., Kaempferia pandurata Roxb., B. pandurata or Gastrochilus panduratum RIDL. and popularly known as Chinese ginger, temu kunci, Chinese keys or lesser galangal is a culinary and medicinal herb from Asia.

Different countries have different names for the fingerroot for example, the Manipuri people call it Yai-macha, Indonesian people call it temu kunci, Thai people call it krà.tɕʰāːj, krachai or กระชาย, Thai ginseng while the Cambodians call it Khmer: ខ្ជាយ or k'cheay. Fingerroot is from the Zingiberaceae or ginger family that comprises of more than 1300 species of spicy perennial herbs with creeping horizontal and tuberous rhizomes. The word fingerroot is attributed to its similar shape with multiple fingers meeting at a central point. It is a excellent source of flavonoid compounds and essential oils that have been reported highly valuable due to its pharmacological and biological properties such as anti-oxidizing, anti-inflammatory, anti-fungal, antimicrobial, anti-cancer and antibacterial. Due to these essential properties of this rhizome, it is normally used for treating various ailments and diseases.

Treatment of Gastrointestinal Diseases
Due to the efficacy of fingerroot, this rhizome is used in folk medicine for treating gastrointestinal diseases such as stomach ache, diarrhoea, flatulence, dyspepsia and colic disorder. Pimpinella anisum (anise) and fingerroot can be blended together and used for treating constipation and bloating. It is also effective for strengthening the stomach. Fingerroot is carminative in nature and has been proven effective for preventing formation of gas in the gastrointestinal tracts. It also helps to expel gas from the intestinal tracts thus combating flatulence. Antiviral Properties
Fingerroot is antiviral in nature and as such very effective for tackling viruses such as cough, chest infections, cold and asthma. For treating these viruses, chew slices of fingerroot together with areca catechu nuts.
Diuretic Properties
This rhizome can be combined with Pimpinella anisum (anise) and used as a diuretic for children. Diuretics promote easy passage of urine.
Anti-anthelmintic Properties
Fingerroot is anti-anthelmintic in nature and as such very effective for expelling parasitic worms. The rhizome can be blended together with coconut milk and used for destroying and expelling helminths. The extract of fingerroot is effective against protozoan parasites, roundworms, Giardia intestinalis, Entamoeba histolytica.
Anti-inflammatory Properties
Fingerroot contains anti-inflammatory properties and as such very effective for treating rheumatism, muscle pain, gout and arthritic pain. It is also used traditionally for reducing inflammation in women’s uterus.
Treatment of Vaginal Infection
The rhizomes of Boesenbergia rotunda, when combined with other herbs and spices can be used for treating vaginal infections. Vaginal infection is a common female condition caused by fungus candida, yeast, STDs, bacteria and hygiene products etc. Symptoms include swelling, rashes, itching and inflammation. Fingerroot is also used for treating leukorrhea, which is marked by yellowish or whitish discharge of mucus from the vagina.

HI THERE.. IT IS GREAT TO MEET YOU.. Cooking is a passion I developed at a very tender age from my mum and this online platform is where I aim to share and grow knowledge in all things cooking.
View all posts by Blessing Okpala →
ROASTED RADISHES
NEGRO PEPPER (UDA SEED) - AN EXCEPTIONAL SPICE