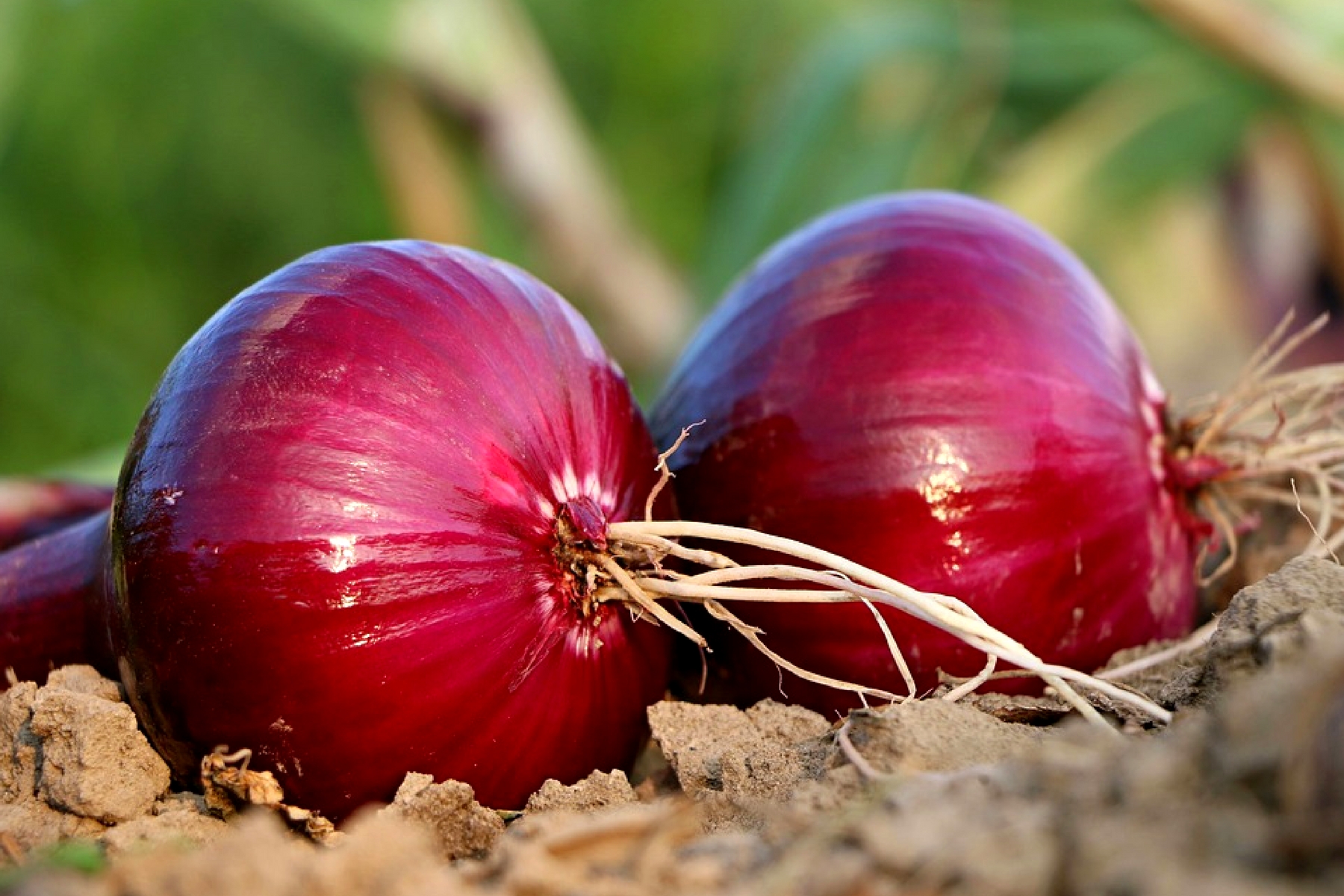 Vegetables and fruits continue to play an integral role in our everyday living. Being an excellent source of essential vitamins, minerals and phytochemicals, they make up a balanced diet. Furthermore, they contain numerous antioxidants that scavenge for free radicals in the body thereby protecting the body from harm caused by oxidative stress.

The natural compounds such as flavonoids, phenols and isoflavonoids derived from these nature’s gifts have been proven effective for promoting the healthy functioning of the body. One of such powerful essential vegetable is onion. Onion is a globally recognised functional food that is cultivated for its culinary, nutritional and medicinal benefits. Onion is botanically known as Allium cepa and it belongs to the Liliaceae (lilies) family. It is a widely cultivated vegetable of the genus Allium (Esfahani et., al 2012).

Onion is widely cultivated all over the world and used mostly as a vegetable either cooked, eaten raw or as part of a prepared dish. It is distinguished by its strong pungent smell especially when chopped. Besides, chopped onion releases some characteristics chemical substances that irritate the eyes. Such eye irritation usually causes uncontrollable tears, which is attributed to the release of a volatile gas known as syn-propanethial-S-oxide.

Cutting an onion tends to damage the cells thereby leading to the release of the alliinase enzyme. Onion is a biennial plant but is usually grown as an annual plant. The plant has a bluish-green leaves with a hollow-cylindrical shape while the bulb at the base of the plant tends to swell at a particular day time. It grows approximately 15 to 45 cm in height and is mostly fleshy, hollow and cylindrical, with one flattened side.

An onion inflorescence is a globular umbel type and it usually bears white flowers with parts in sixes. Once an onion begins to mature, there is an accumulation of food reserves in the leaf bases and this makes the onion bulbs to swell. During the dry season of the year or autumn, the leaves die back leaving the outer scales of the bulb dry and suitable for harvesting.
However, if they still remain in the soil over winter or wet season, the bulb begins to sprout with new leaves appearing. Also, a stout-looking, hollow and long stem expands, with a bract protecting the tender developing inflorescence. Onion seeds are triangular, black in colour with a glossy appearance. The crop is susceptible to diseases and pesticidal attack by rotting fungi, onion fly and onion eelworm.
Some species of Allium (onion) include; Allium canadense (Canada onion), Allium vavilovii, Allium proliferum (Egyptian onion), Allium asarense, Allium fistulosum (Japanese bunching onion), pink onions, red pickler onions, pickler onions, Indian onion, red onion and white onion. 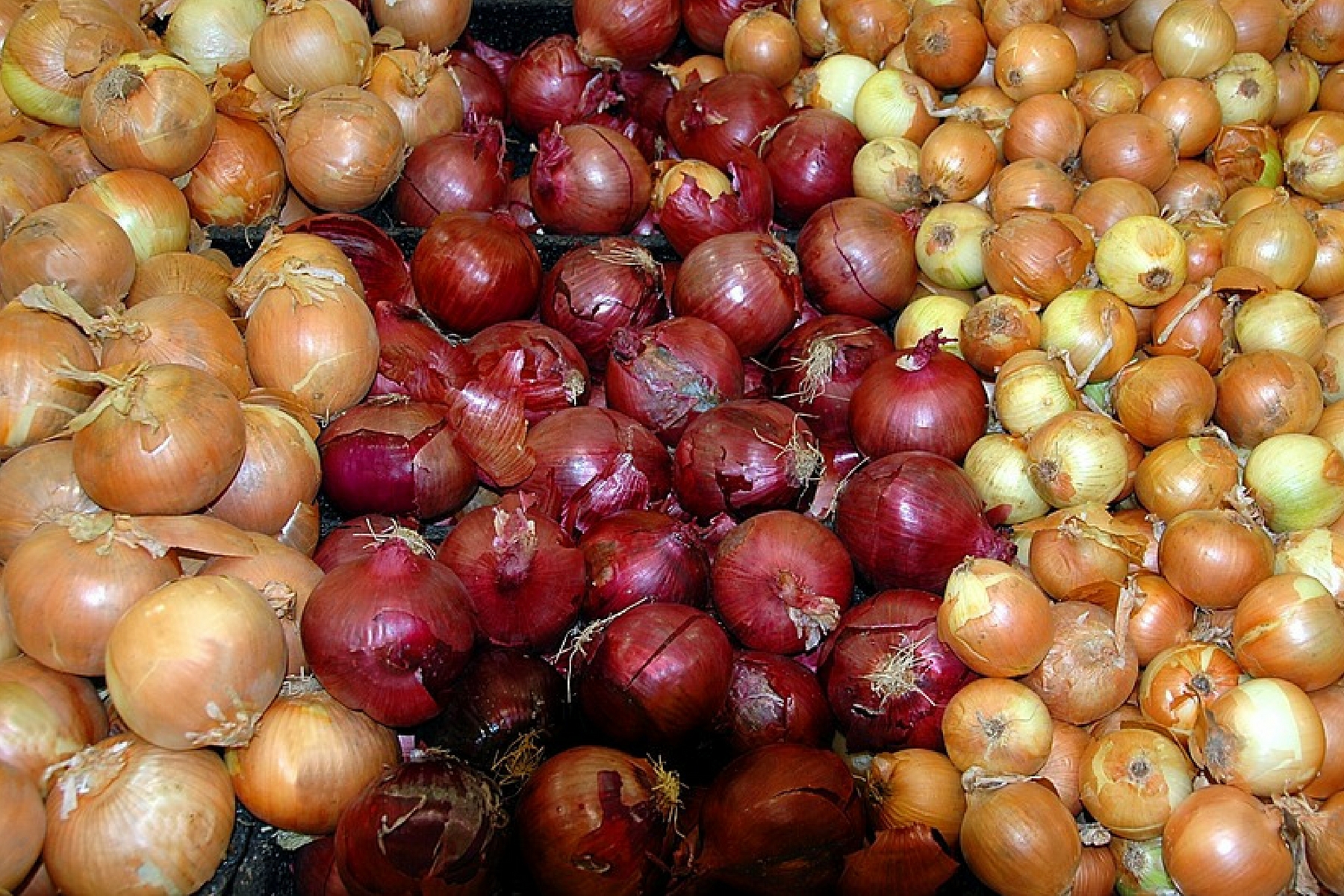 Nutritional Values of Onion (Allium cepa)
According to Ashwini et., al (2003), onion is a rich source of protein, fibre, fat, folic acid, energy, sodium, vitamin C, vitamin B6, and many other nutrients in small amounts. Upadhyay (2016) also supports that onion contains 1.5% protein, 89% water, vitamins B1, vitamin B2, vitamin C, folic acid, selenium, potassium and several other nutrients in small proportion. It contains polysaccharides such as flavonoids (especially quercetin), saccharose, fructosans, peptides and essential oil.
Onion is a rich source of sulphur compounds including sulfoxides, thiosulfinates, tri-sulfides, cepaenes, S-dioxides and S-oxides. It also contains phenolics and flavonoids that have anti-cholesterol, anti-cancer, anti-inflammatory and antioxidant properties as reported by Geetha et., al. 2011). However, researchers agree that shallots, which is of the same family with onions contain the highest level, up to six times the amount found in Vidalia onions (Yang et., al. 2004).

Culinary Purposes
Onion is a vegetable that can be eaten fresh alone or in salads. It can be used for spicing and flavouring food or for preparing onion chutneys, onion rings or pickles. Onions can be obtained fresh, in powdered form, chopped, frozen, caramelized, pickled or canned, minced or granulated (Sheikh et., al. 2012).
Onions can be sliced, diced or chopped for cooking food and various cuisines. Different countries and individuals have different ways of using onions. Onions can be stir-fried, baked, sauteed, boiled, braised, grilled, roasted or sautéed. This vegetable can be used as a thickener for curries, French onion soup, pickled in vinegar and eaten as a snack, or served as a side dish.

Antioxidant Activity
Studies reveal that onion is an excellent source of antioxidants, which are free radicals scavengers that reduce the risk of diseases. Ashwini et al., (2013) evaluated the phytochemical components and antioxidant potential of methanolic and hydrophilic extracts isolated from in vivo and in-vitro cultures of onion varieties of Bellary and CO3. Phytochemical components such as anthocyanins, flavonoids, ascorbic acid and phenolics were analyzed.
The antioxidant activities were examined by DPPH and FRAP methods and the results showed that the both methanolic extracts exhibited radical scavenging activity. The DPPH scavenging activity in Bellary and CO3 onion varieties ranged from 6.5% to 11.8% however, the FRAP values ranged from 0.9 - 3.3 µM/100 µg FW. The total anthocyanins ranged from 9.9 - 29.9mg/kg, vitamin-C 48.6 - 78.6 mg/kg, total phenolics and flavonoids content was 15.7 - 34.7 mg/g GAE and 0.65 - 1.17 mg/g respectively. Significant amounts of ascorbic acid, anthocyanins, flavonoids and phenols were observed in both of the varieties. The study showed that the potential mechanism of the biological activities in onion could be attributed to the free radical scavenging, polyphenols and antioxidant activities.

Antibacterial Properties
Adeshina et al., (2011) investigated the antibacterial activity of fresh red and white Allium cepa (onion) and Zingiber officinale (Ginger) juices against multidrug resistant bacteria namely; Staphylococcus aureus, Salmonella typhi, Escherichia coli and Pseudomonas aeruginosa. These bacteria were isolated from salad using agar dilution methods and agar well diffusion.
From the results, the entire bacteria except Staphylococcus aureus were susceptible to the fresh red and white onion juices with the diameter of zones of inhibition ranging from 15mm to 35mm. However, the test bacteria isolates showed no sensitivity to the fresh ginger juice. The study shows that the fresh juices of onion exhibit significant antibacterial effects against the multidrug resistant bacteria Salmonella typhi, Pseudomonas aeruginosa, and E. coli, but the Zingiber officinale (ginger) did not show antibacterial activity against the organisms.
White onion exhibited more antibacterial activity unlike the red onion against the organisms. These researchers recommend that cooks, chefs, restaurants and everybody should include more onion especially the white onions in salads so as to prevent the growth and multiplication of these bacteria isolates. The antibacterial effects of the onion juice can be due to the abundant polyphenols and flavonoids found in onion.

Hypoglycemic and Insulin-sensitizing Ability
Jung (2011) examined the hypoglycemic and insulin-sensitizing ability of onion peel extract (OPE) containing high quercetin in high-fat diet and streptozotocin-induced diabetic rats. The study showed that onion peel extract could improve the glucose response and insulin resistance associated with type 2 diabetes. This is achievable by reducing the metabolic dysregulation of free fatty acids, down-regulating the inflammatory gene expression in liver, up-regulating glucose uptake at peripheral tissues and suppressing oxidative stress. The onion peel extract showed greater potency, unlike the pure quercetin equivalent. The results support the essence of utilising onion peel for improving the insulin insensitivity in type 2 diabetes.
Reduces Gastric Cancer Risk
Zhou et al., (2011) investigated the chemopreventive effects of Allium vegetables such as onions, leeks, shallots, garlic, chives, scallion etc). They performed a meta-analysis of cohort and case-control studies in other to analyse the relationship. From the analysis, the intake of large quantities of Allium vegetables reduced the risk of gastric cancer. This suggests the need to consume more Allium vegetables in other to reduce the risk of gastric cancer.

Prevents Obesity-related Cancer
Wang et al., (2012) study showed that the ethyl acetate extract of onion (EEO) had significant inhibitory effects on animal fatty acid synthase (FAS). Furthermore, the extract could induce apoptosis in FAS over-expressing human breast cancer MDA-MB-231 cells. Apoptosis is the death of cells that occurs as a normal and controlled part of an organism's growth or development. The apoptosis was accompanied by the reduction of intracellular FAS activity.
The results show that the apoptosis induced by ethyl acetate extract of onion occurs through the inhibition of FAS. Moreover, the ethyl acetate extract of onion could inhibit lipid accumulation during the differentiation of 3T3-L1 adipocytes. This was also related to its inhibition of intracellular animal fatty acid synthase (FAS) activity. Being that obese patients stand a high risk of developing cancers, this study supports that such patients should include more onions in their diets in other to prevent obesity-related cancer.
Antidiabetic Properties
Kook et al., (2009) evaluated the impact of onion and garlic in some experimentally-induced diabetic rats by meta-analysis of related studies. The results of the meta-analysis showed that the consumption of onion extract could be effective for reducing the plasma glucose concentrations as well as the body weight.

Antidepressant-like effect
Sakakibara et al., (2008) evaluated the antidepressant-like effect of the quercetin-rich onion using the rat behavioural model of depression and the forced swimming test (FST). The study shows that a daily administration of onion powder at a dosage of 50 mg/kg of body weight/day for 14 days significantly reduced the immobility time in the forced swimming test without changing the motor dysfunction. This shows that the daily intake of onion exerted antidepressant-like activity.
Hepatoprotective potentials
Obioha et al., (2009) investigated the hepatoprotective effect of onion and garlic extracts on cadmium (Cd)-induced oxidative damage in rats. The study showed the hepatoprotective potentials of onion.
Antimicrobial Activity
Eltaweel (2013) screened the methanol and aqueous suspensions of dried Allium cepa bulbs extract for its antimicrobial activity using the agar-well diffusion method. This was tested against the Gram-positive bacteria Staphylococcus aureus. They tested the suspensions at concentrations of 1, 10, 100 and 1000μg/ml and the results show that all the suspensions showed an inhibitory effect against the tested bacteria.
The highest zone of inhibition was estimated with the highest concentration of methanolic suspension (29 mm). The highest effect of the aqueous suspensions reached up to 23 mm with the concentration of 1000 μg/ml. The other concentrations of either aqueous or methanolic exhibited the various inhibitory effects on the tested bacteria. The study, therefore, supports that onion extract has antimicrobial activity against Staphylococcus aureus.
Other Medicinal Purposes
Medicinally, ancient Greece athletes were made to consume a large number of onions because they believed onions lighten the blood balance. Also in the olden days, doctors recommend patients to eat onions to relieve headaches, treat erectile dysfunction, snakebite, treat cough and facilitate bowel movements.

How to Store Onions

Onions are suitably stored at room temperature under cool, well-ventilated area in other to prevent spoilage. Moreover, it is important to note that they can easily draw moisture from vegetables stored together with them and this can easily lead to decay. It is also worthy to note that any cut onions should be tightly wrapped, refrigerated and used within two to three days. 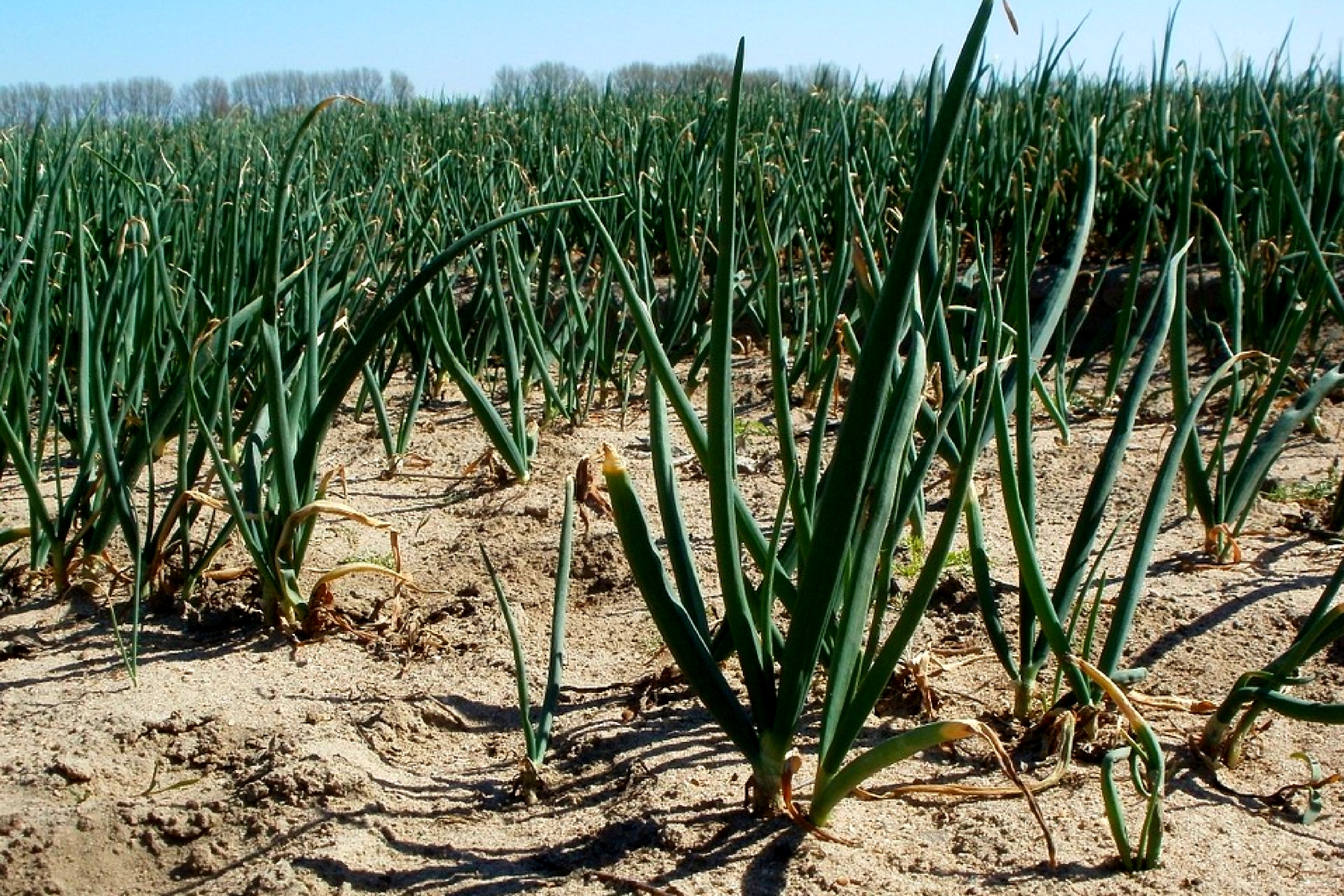 HI THERE.. IT IS GREAT TO MEET YOU.. Cooking is a passion I developed at a very tender age from my mum and this online platform is where I aim to share and grow knowledge in all things cooking.
View all posts by Blessing Okpala →
YAM PORRIDGE
KENWOOD BLENDER