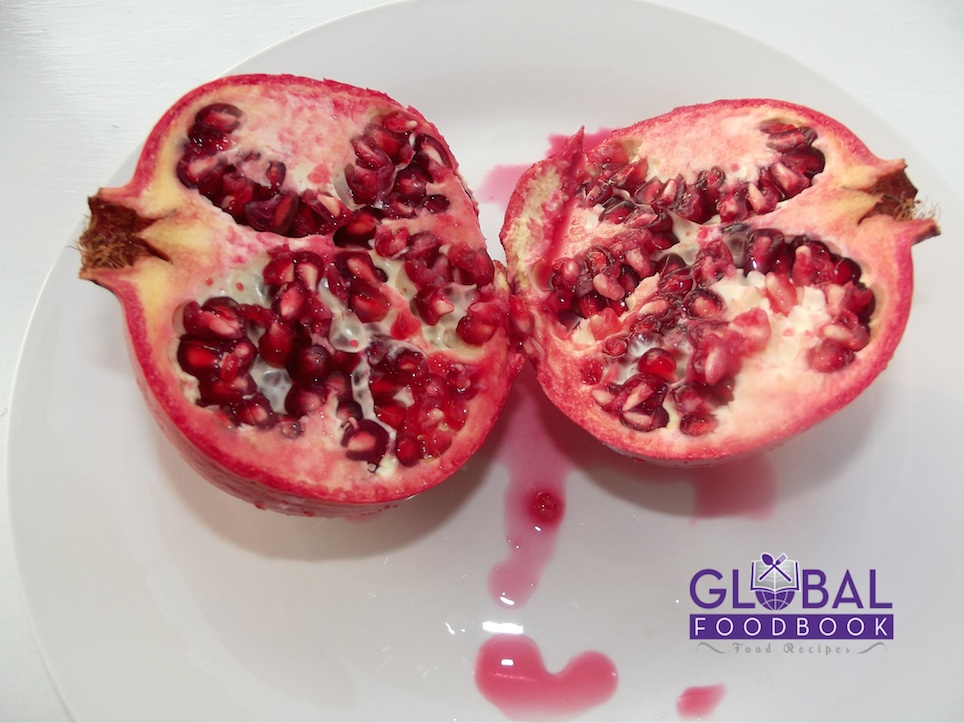 Pomegranate is botanically referred to as Punica granatum, a fruit-bearing deciduous  tree growing between 5 to 8 meters. Pomegranate is widely believed to have originated from Iran since ancient times.Presently, it is widely cultivated all over  the Mediterranean region of southern Europe, the Middle East and Caucasus region, Asia, northern and tropical Africa. It was however introduced by Spanish settlers in the Latin America, Arizona and California  in 1769.
In the past, many efforts have been made by researchers to examine the composition of pomegranates. However, in a recent study, Sreekumar et., al. (2014), agree that the chemical component of the fruit depends on the growing region, maturity, cultivar, cultivation method, climate, and storage circumstances. Almost 50% of the fruit weight results from the peel, which is an vital source of bioactive compounds like flavonoids, calcium, ellagitannins, phenolics, proanthocyanidin compounds, complex polysaccharides, minerals, nitrogen, phosphorus, magnesium, and sodium. The 50 % edible part of the fruit consists mainly of 40% arils and 10% seeds. Arils comprises of 85% water, 10% total sugars, especially glucose & fructose, 1.5% pectin, ascorbic acid, citric acid and bioactive compounds such as flavonoids and phenolics.
Once the pomegranate is cut open with a knife, the seeds are separated from the peel and internal white pulp membranes. The process of separating the seeds is far  easier when immersed  in a bowl of water because the seeds sink and the inedible pulp floats above the water surface. Another easier way of scooping out the seeds from the peel is by freezing the entire fruit. The seeds ideally are consumed raw, although the tasty watery sarcotesta is the desired part. The peel is often bitter and should be avoided. The taste also vary depending on the species and subspecies of pomegranate and its ripeness.The pomegranate juice can be sweet or sour, depending on the specie, but most fruits are moderate in taste. Pomegranate juice is a very popular drink in Persian and Indian cuisine, but has been widely distributed in the United States since 2002.
Researchers have agreed that people from Middle Eastern, Asian, and South America relentlessly chew small bits of pomegranate’s bark, petals, and peel to treat diseases and ailments ranging from the diseases of the mouth, gums and dysentery (Longtin 2003). It is a rich source of energy, carbohydrates, fat, protein, Vitamin B, C, E, K, Folate, Thiamine, Riboflavin, Niacin, Calcium, Iron, Magnesium, Potassium, Sodium, Zinc and phosphorous.
Pomegranates are highly nutritional and can be used in cooking, making juices, baking, blending smoothies, manufacturing alcoholic drinks, wines and beverages.It can be eaten in several ways such as; fruits, for garnishing of salads, for desserts, as pomegranate bruschetta, as juice, as pomegranate dip, as condiments and food flavouring. It is such a healthy fruit that facilitates healthy body system.
REFERENCES
Longtin, R. (2003) The Pomegranate: Nature’s Power Fruit? Journal of the National Cancer Institute, Vol. 95, issue 5. pp.347.
Sreekumar, S., Sithul, H., Muraleedharan, P., Azeez, J. M. & Sreeharshan, S. (2014) Pomegranate Fruit as a Rich Source of Biologically Active Compounds, BioMed Research International, pp. 2-10.

HI THERE.. IT IS GREAT TO MEET YOU.. Cooking is a passion I developed at a very tender age from my mum and this online platform is where I aim to share and grow knowledge in all things cooking.
View all posts by Blessing Okpala →
Aqua Optima Water Chiller
Duronic MF6 Mini Fridge