ALL ABOUT NUTMEG - IT'S USES, BENEFITS AND SIDE EFFECTS 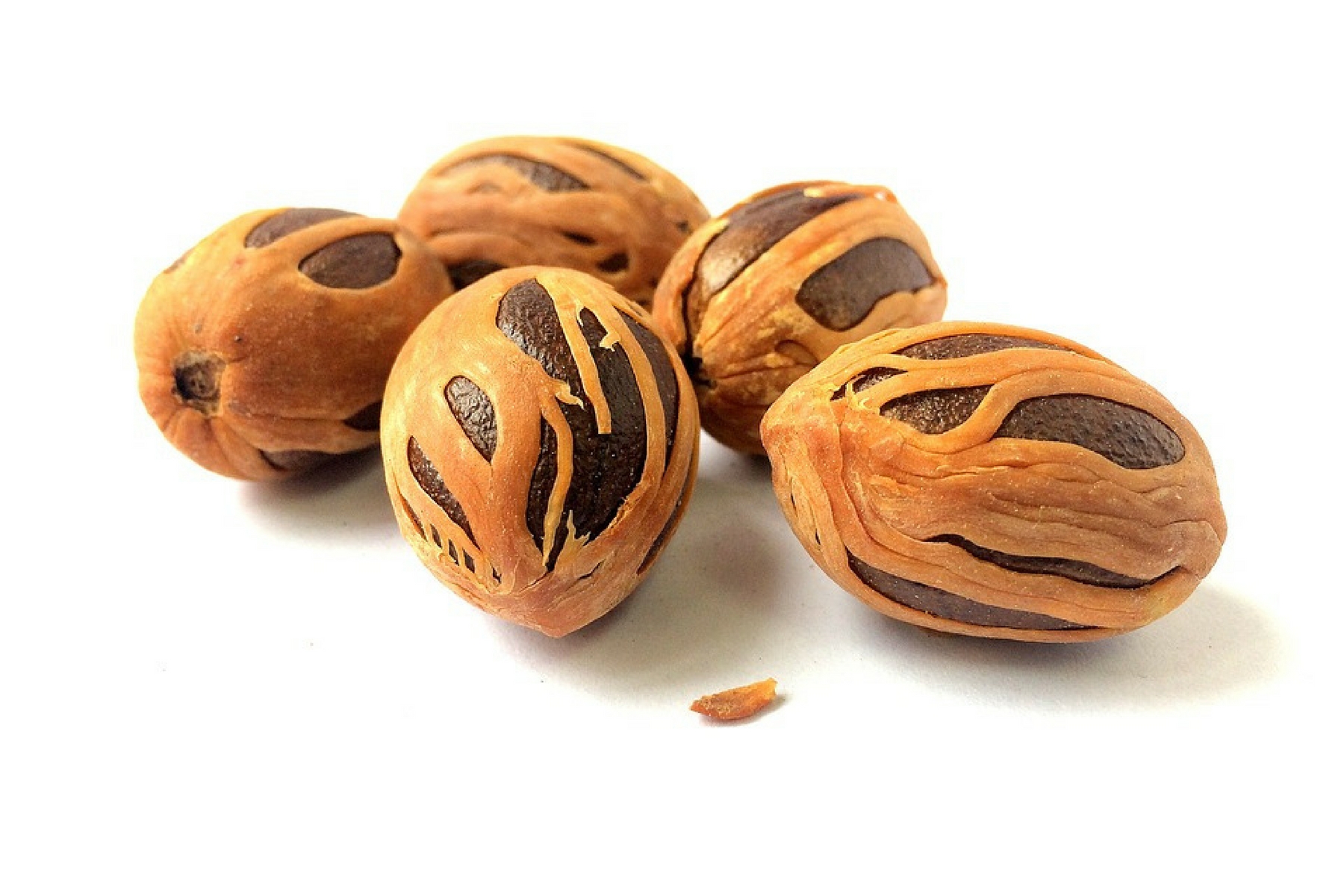 Just like several other spices in circulation, nutmeg is one of those flavourful food seasoners that never misses its place in the kitchen. The fragrance and aroma it renders and the colourful brownish twists it adds to food are just phenomenal. But apart from being a food condiment, it might also interest you to know that nutmeg is considered effective for tackling many ailments and diseases.

Nutmeg is the seed of an evergreen tree that belongs to the genus Myristica. It is botanically known as Myristica fragrans Houtt. and has remained a popular spice used mainly for seasoning food and for medicinal purposes.

Distinguished by its rough egg-shape appearance, this seed is believed to have originated from Indonesia. Thick brownish black coloured nutmeg seed is mostly enveloped by a dark red mace (arillus). Nutmeg seed measures between 18 to 30 millimetres long and 15 to 19 millimetres wide. Nutmeg trees are dioecious in nature thus can only be sexually or asexually propagated.

Culinary Purposes
This aromatic food condiment is popularly used for spicing and flavouring food especially in a powdered or grated form. It can be used for preparing assorted dishes such as stew, soup, konro, meat stock, soto, pastries, fries, fish, garam masala, curries, potato, meatloaf, legumes, sauces, rice, beans, meat, dumplings (tortellini) and crabs etc. Nutmeg is also used for preparing iced nutmeg juice, syrups, jam, squash, sweets, candies, chutney, beverages, desserts and pickles.
Nutmeg Essential Oil and Butter
Studies reveal that nutmeg can be used for producing commercial products such as essential oils, oleoresins and nutmeg butter. Nutmeg seed contains approximately 16% oil, which is mostly produced through the process of hydrodistillation, water distillation, steam distillation or solvent extraction.
Nutmeg oil is distinguished by its strong aroma with clear, pale greenish or yellowish colours. It is highly sensitive to temperature and light, insoluble in water and soluble in alcohol. Nutmeg also contains fat oil, which is known as nutmeg butter or oleoresin. Oleoresin contains a significant amount of trimyristin acid.
Volatile fraction of nutmeg oil contains safrole, d-camphene, l-terpineol, myristicin, d-pinene, limonene, geraniol and d-borneol. Myristicin is considered a toxin in its pure form and an excessive consumption of nutmeg can lead to myristicin poisoning. Nutmeg butter is reddish-brown in colour with a semisolid texture. Nutmeg butter contains trimyristin, which can be converted into myristic acid, a 14-carbon fatty acid.

Medicinal Uses of Nutmeg
Nutmeg is aphrodisiac, analgesic, anti-inflammatory, antioxidizing, hepatoprotective, antifungal, haemostatic, carminative, antiseptic, astringent, antispasmodic, anthelmintic, parasiticidal and insecticidal in nature. Nutmeg seed is effective for treating tuberculosis, fever, cough, colds, paralysis, skin diseases (eczema, acne, eczema), gastrointestinal diseases (vomiting and diarrhoea). Both nutmeg and nutmeg oil can also be used for tackling nervous and digestive systems disorders. The high medicinal attributes of nutmeg are due to its high constituent of volatile oils.
Aphrodisiac Effects
Tajuddin et al., (2005) investigated the aphrodisiac effects of 50% ethanolic extract of nutmeg. This study was carried out to also determine the likely adverse effects and acute toxicity of nutmeg using various animal models. Nutmeg extract suspension was given (100, 250 and 500 mg/kg, p.o.) respectively to various groups of male rats on a daily basis for a period of 7 days.
The experimental female rats were prepared for mating using hormonal treatment. The overall mating behaviour, including the potency and libido, were examined and compared using the standard reference drug sildenafil citrate. It was found out that the oral administration of the nutmeg extract at the dose of 500 mg/kg, produced a significant outcome of sexual behaviours in male rats.
The nutmeg extract significantly boosted the mounting frequency, long flips, penile stimulation, intromission latency, erections, quick flips and intromission frequency. Furthermore, a significant decline was observed in the mounting latency and post-ejaculatory interval.
Interestingly, the extract was found out to exhibit no adverse effects and acute toxicity on the studied animals. These positive results with increased sexual behaviours of the studied animals without any noticeable side effects suggests that the 50% ethanolic extract of nutmeg contains aphrodisiac properties. The ability of this extract to increase sexual potency and libido is due to its nervous stimulating properties. Therefore, the above researchers recommended the use of nutmeg in tackling male sexual problems.

Analgesic Properties
Hayfaa et al., (2013) investigated the analgesic effects of the alkaloids found in nutmeg seed in a mouse model of acetic acid-induced visceral pain. They extracted alkaloids from ground nutmeg seed kernels with 10% acetic acid in 95% ethyl alcohol. Visceral pain was induced in male and female BALB/c mice using an intraperitoneal injection of 0.6% acetic acid.
The analgesic effect of alkaloids (0.5 gram or 1 gram per kilogram [g/kg], administered orally) was examined by assessing the writhing response. The acute toxicity was tested in response to 2, 3, 4, 5, or 6 g/kg of alkaloid extract while the median lethal dose (LD50) was ascertained using probit analysis.
The results showed that the alkaloid extract at a dosage of 1 g/kg significantly minimised the number of writhing responses in the female, but not male mice.
However, the 0.5 g/kg of alkaloid extract exhibited no effect in both sexes. When the experimental animals were given a dose of 4 g/kg or higher, the researchers observed signs of dizziness, hypoactivity, abnormal behaviour and unstable gait. Even after administering alkaloids, the abnormal behaviours lasted for several hours. Therefore, the study supports that nutmeg seed alkaloids are analgesic in nature however, they are slightly toxic.

Anti-inflammatory properties
Bamidele (2011) investigated the effects of ethanolic extract of nutmeg on some haematological indices using albino rat as a model. They used 24 Wistar strain albino rats weighing 140 to 160 g and these were randomly distributed into four (4) groups of six (6) animals per group. Group I comprises of rats that were orally administered 10 ml/kg normal saline.
This group was used as the control while the animals in groups II, III and IV were orally administered 50% ethanolic seed extract of nutmeg at doses of 100, 250 and 500 mg/kg respectively. The results showed significant decreases (p< 0.05) in red blood cell (RBC) count, packed cell volume (PCV), haemoglobin concentration (HBC) and platelet count, especially at high doses.
Besides, there was also a significant increase (p< 0.05) in total white blood cell (WBC) count. Based on the research findings, it was confirmed that nutmeg seed contains anti-inflammatory properties especially when given at high doses. 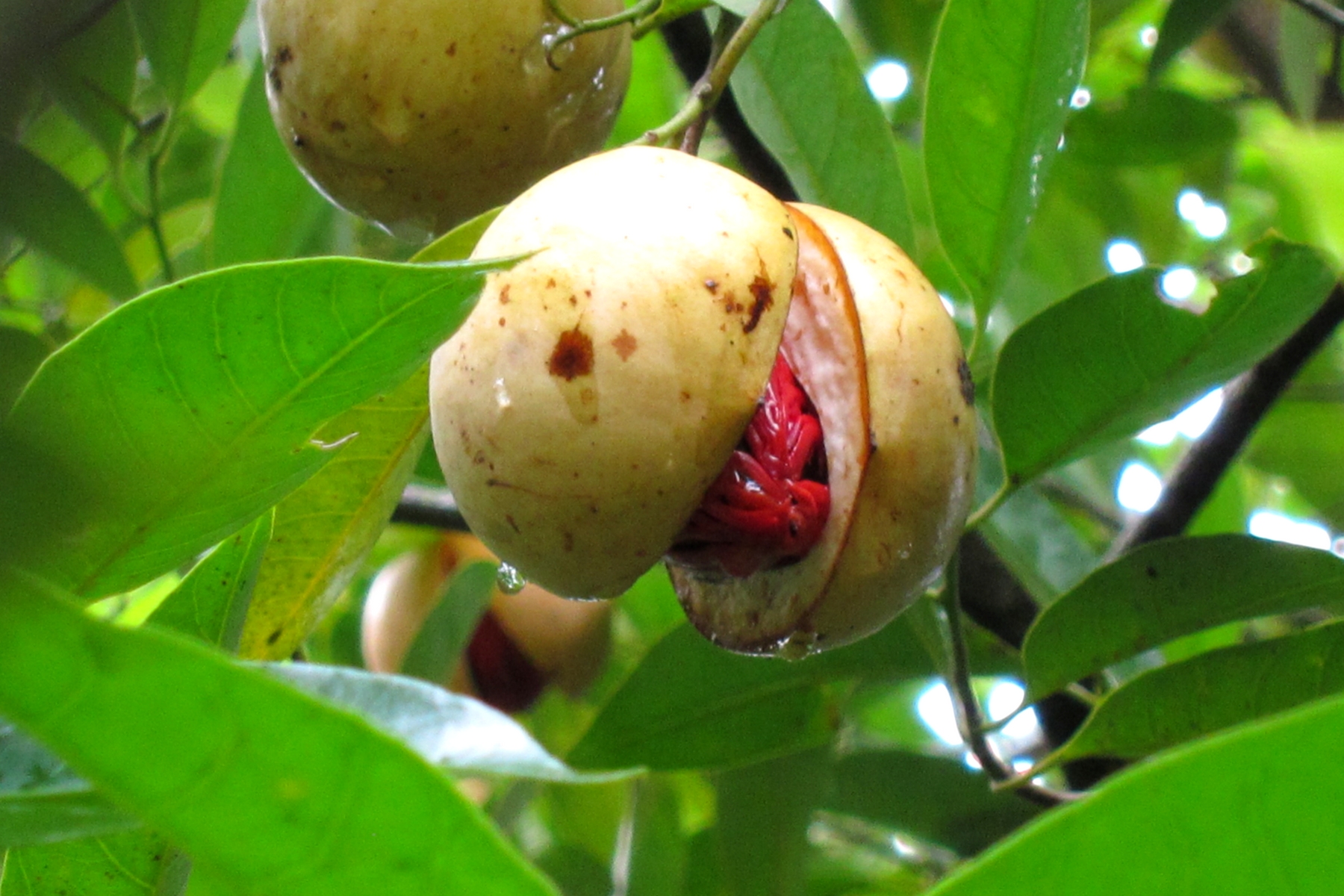 Antioxidant Properties
Tan et al., (2013) assessed and compared the antioxidant properties of nutmeg’s seed, pulp, skin and mace. They extracted frozen dried samples using 80% methanol, while Folin-Ciocalteu assay was introduced to determine the total phenolic content. The antioxidant properties were evaluated using ferric reducing antioxidant power and Trolox equivalent antioxidant capacity (TEAC) assays.
Furthermore, aluminium chloride assay was used to ascertain the total flavonoid content and ascorbic acid using the titrimetric method. The results showed that nutmeg contains a high amount of antioxidants, especially the seed.
Hepatoprotective Properties
Morita et al., (2003) evaluated the hepatoprotective properties of 21 different spices, of which nutmeg was among. The results showed that nutmeg exhibited the most potent hepatoprotective effects. The bioassay-guided isolation of the active compound obtained from nutmeg was carried out in mice using a single oral administration of the respective fractions. These researchers found out that myristicin, which is one of the essential oils of nutmeg contains a significant level of hepatoprotective effects.

Treatment of periodontitis
Periodontitis is an inflammation of the tissue surrounding the teeth, which usually causes shrinkage of the gums and loosening of the teeth. Alterations in the oral microbial flora to pathogenic microorganisms is the leading cause of periodontitis. Jangid et al., (2014) studied the effects of nutmeg in treating periodontitis. The result showed that using the right doses of nutmeg can be effective for treating periodontitis.
Antifungal Properties
Duarte et al., (2011) evaluated the antifungal effects of the nutmeg essential oil on the Guinardia citricarpa fungus. The nutmeg essential oil in high concentration was considered a suitable substitute for the pesticides used to control the Guignardia citricarpa fungus.
Industrial Purposes
Nutmeg essential oil can be used for industrial purposes in the production of body creams, toothpaste, soaps, syrups and washing detergents.

Side Effects of Nutmeg
1) Despite the reported overwhelming benefits of nutmeg, caution must be applied during its consumption. It is highly recommended to only consume small quantities of nutmeg due to its high constituent of myristicin. Myristicin could be detrimental to health especially when taken in high quantities.
2) Nutmeg is reported to be an abortifacient thus can induce abortion. Interestingly, using it for only culinary purposes during pregnancy is considered non-toxic and safe for both mother and the unborn baby. However, pregnant women are recommended to consume nutmeg only in small quantities as it can inhibit the prostaglandin production.
3) Nutmeg contains hallucinogens, which could affect the growing fetus, especially if consumed in large amounts.

HI THERE.. IT IS GREAT TO MEET YOU.. Cooking is a passion I developed at a very tender age from my mum and this online platform is where I aim to share and grow knowledge in all things cooking.
View all posts by Blessing Okpala →
EXTRAORDINARY BENEFITS AND USES OF SAFFRON
AMAZING BENEFITS OF MELALEUCA