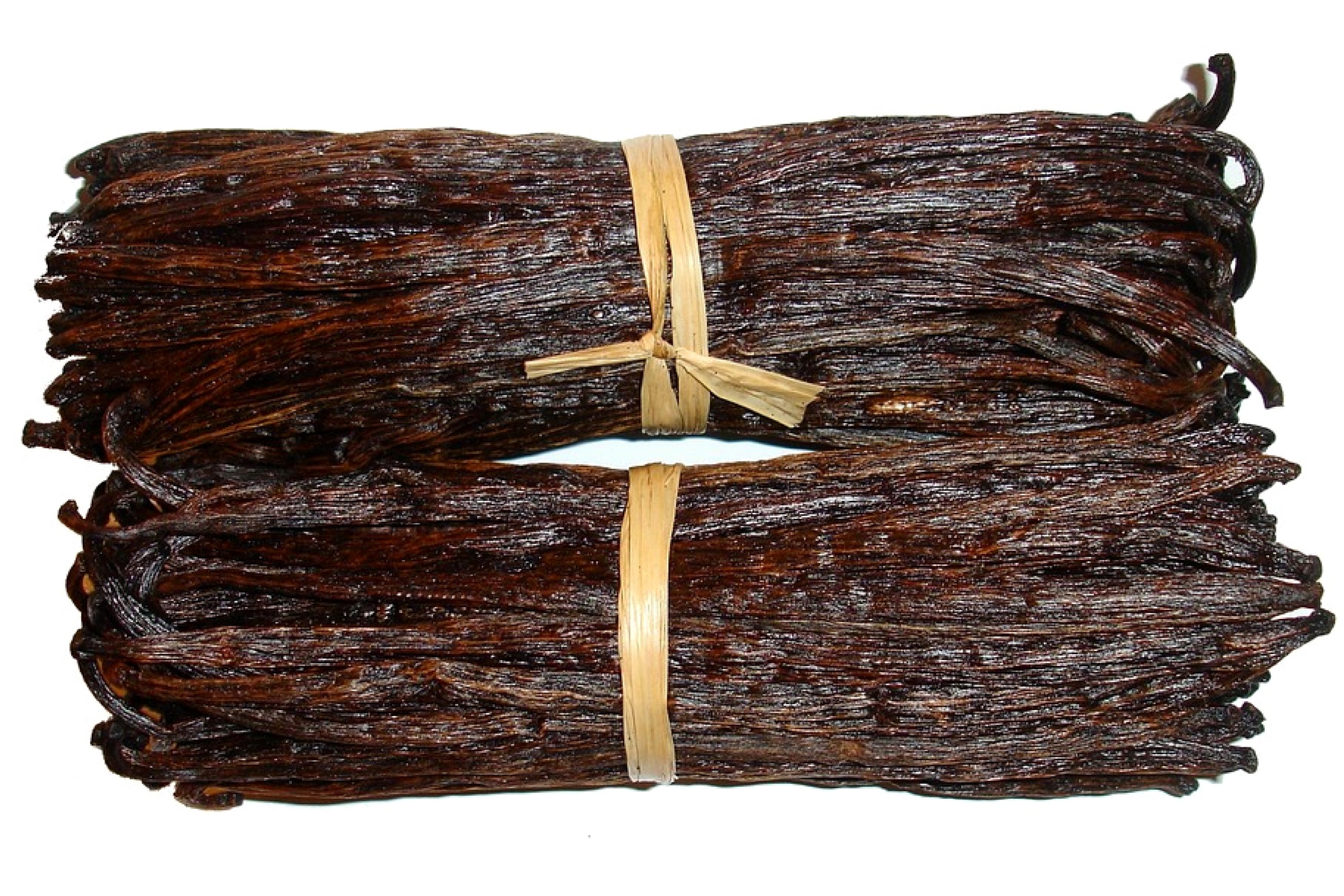 The most precious group of flowering plants all over the world are the orchids. Orchids belong to the family of Orchidaceae, which is the biggest family of the plant kingdom. Orchids, which are distinguished by their varying shapes, sizes and colours are mostly grown for ornamental and medicinal purposes.

They are also a source of food and useful for several cultural practices. Among the numerous group of orchids are the monocotyledonous vanilla, which belongs to the genus Vanilla. Although several orchids are mostly grown for their flowers, vanilla stands out to be the only orchid grown for both its flowers and fruits.

Vanilla is grown largely for its distinctive aromatic fragrance. The fruits are known as the vanilla beans, which are also referred to as Tahitian vanilla beans, black flower or vanilla pods. Vanilla is botanically known as Vanilla planifolia as well as known by other names such as vanilla orchid, flat-leaved vanilla, vanilla fragrance or vanilla vine. It is originally from Mexico before spreading to other parts of the world such as Madagascar, Indonesia and Europe.

The term vanilla emanated from the Spanish word known as "vaina", which connotes "little pod or sheath". Vanilla grows and thrives best in a humid, hot weather with moderate rainfall. It grows by climbing or crawling up a tree just like a vine, thus the need for providing it with support if planted. Growing vanilla tends to cling to the trees or stakes it climbs using its whitish, long aerial roots. 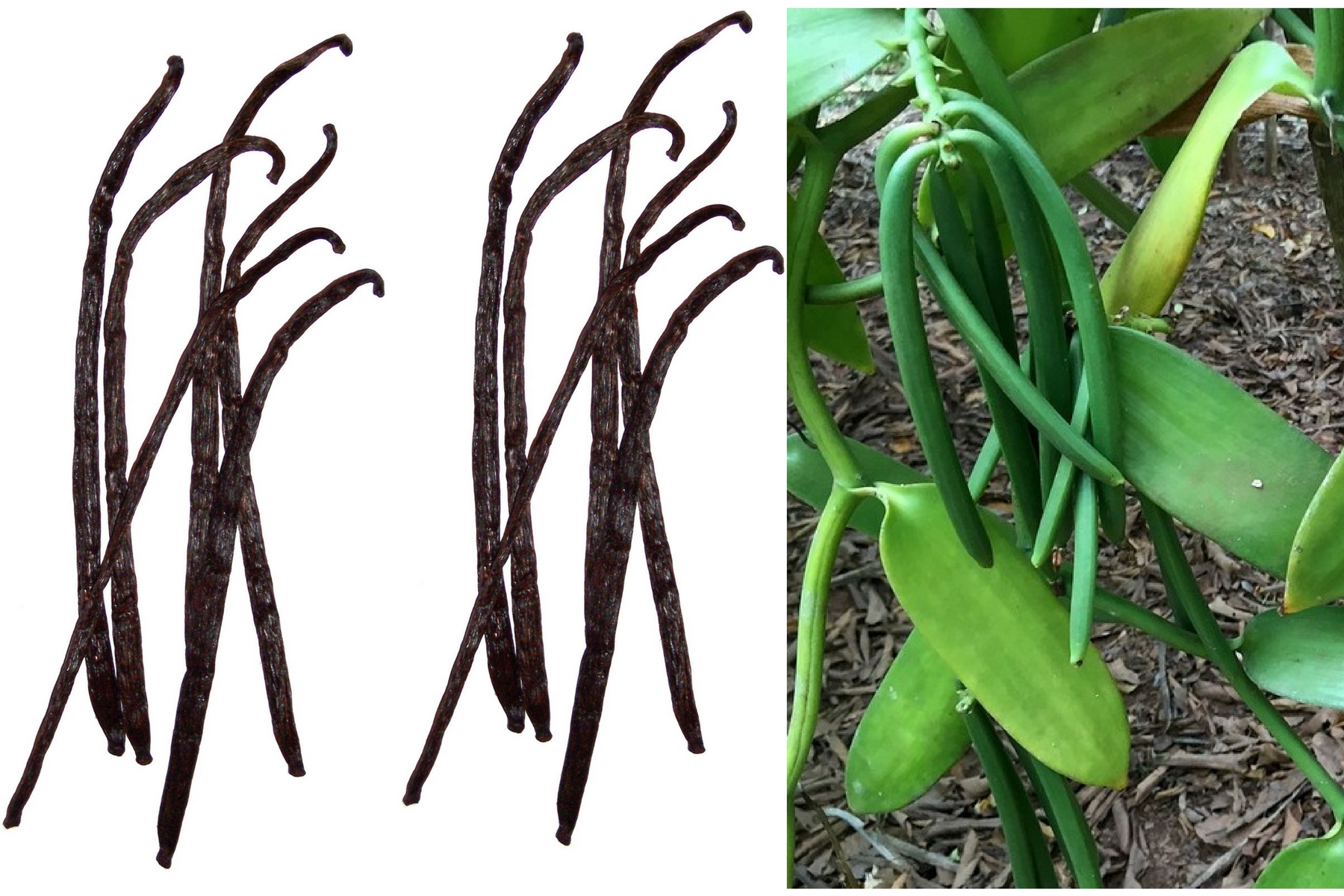 Vanilla flowers are hermaphroditic thus can bear both male and female reproductive organs in a single plant. However, a membrane separates the male and female organs so as to prevent self-pollination. The flowers can be greenish, creamy or yellowish in colour and the three sepals measure between 4 to 7 centimetres long.
The fresh vanilla pods are greenish in colour, the ripe ones are black or brownish red while the dried pods are brownish or black in colour. The vanilla beans or pods contain an oily liquid made up of numerous tiny seeds. Both the pods and the tiny seeds within the pods are highly flavourful. The aromatic fragrance of vanilla beans can be drawn out only after undergoing a curing process. The harvested pods consist of numerous glycosidic compounds, which can only be hydrolysed during the curing process.
It is worthy to note that the quality of cured vanilla pods is highly dependent on factors such as; geographical origin, maturity at harvest, curing conditions and curing procedures. The aromatic fragrance is easily released during the curing process of which b-Glucosidases are the main contributors.
Vanillin is the key chemical compound present in vanilla bean extract that draws out its aromatic fragrance. Vanillin is used immensely as a flavouring agent especially in the beverage, food, pharmaceutical, cosmetics and perfumery industries.

Culinary Purposes
Vanilla is mostly used for flavouring and enhancing the flavour of food such as cakes, ice cream, vanilla milk, cookies, custard, vanilla-scented sugar, beverages, rum, jam, chocolate, caramel etc.
How To Use Vanilla Beans
~ Slit the vanilla pods into halves using a knife.
~ Place the tip of each half of the vanilla pods on a cutting board.
~ Scrape out the seeds from the walls of the pods.
~ Use the vanilla seeds immediately or store unused ones in an airtight container.

Medicinal Uses
Vanilla plant extract contains several medicinal properties thus can be useful for tackling several ailments. It is also a rich constituent of flavonoids, alkaloids, glycosides, carbohydrates and several other phytochemicals. Vanilla is believed to contain both analgesic, antispasmodic and anti-inflammatory properties.
According to Menon and Nayeem (2013), the vanilla plant is effective for treating and preventing toothache, dental caries, dysmenorrhea, ulcers, dyspepsia, hysteria and fever. It can also be used for treating stomach disorders, deep coughs, respiratory pain and congestion.
Hepatoprotective Activity
Geegi et al., (2011) evaluated the hepatoprotective activity of ethanolic extract of Vanilla planifolia against paracetamol-induced liver damage in rats. These researchers orally administered an ethanolic extract of Vanilla Planifolia (100mg/kg) to experimental animals with hepatotoxicity induced by paracetamol (500mg/kg).
They also administered Silymarin (100mg/kg) as the reference standard. The entire test drugs were administered orally by suspending in 0.5% Carboxy methyl cellulose solution. It was observed that the plant extract was able to protect the liver against the injury induced by paracetamol in rats.
This was proven by the tremendous reduction in serum enzymes alanine aminotransferase (ALT), aspartate aminotransferase (AST), alkaline phosphatase (ALP) and bilirubin. The results show that the ethanolic extract of Vanilla planifolia has hepatoprotective activity against paracetamol-induced hepatotoxicity in rats.
Antioxidant Properties
Shyamala et al., (2007) studied the potential use of vanilla extract components as antioxidants for food preservation and as nutraceuticals in health supplements. The vanilla extract was prepared through the extraction of cured vanilla beans with aqueous ethyl alcohol (60%).
The extract was profiled using High-Performance Liquid Chromatography (HPLC). During the extraction period, major compounds such as vanillic acid, 4-hydroxybenzyl alcohol, 4-hydroxy-3-methoxybenzyl alcohol, 4-hydroxybenzaldehyde and vanillin, were identified and separated.
The extract and pure standard compounds were screened to ascertain their antioxidant properties using β-carotene-linoleate and DPPH in vitro model systems. Interestingly, the study observed and supported the potential use of vanilla bean extracts as antioxidants.

HI THERE.. IT IS GREAT TO MEET YOU.. Cooking is a passion I developed at a very tender age from my mum and this online platform is where I aim to share and grow knowledge in all things cooking.
View all posts by Blessing Okpala →
AMAZING BENEFITS OF MELALEUCA
18 DISTINCTIVE BENEFITS OF LAVENDER