WHY SAGO WORMS ARE ESSENTIAL 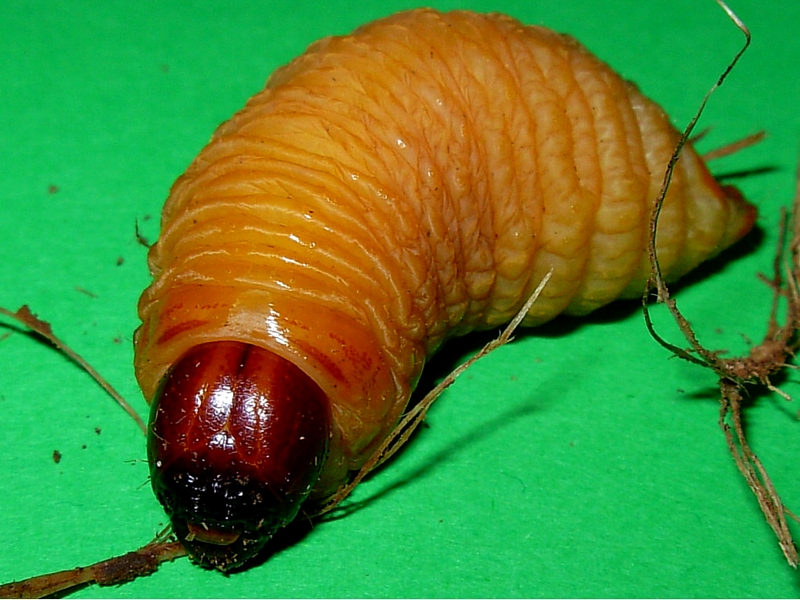 Worm!!! Why on earth should I eat worm? Is it safe to eat worm? Is it healthy? Is it nutritious? What can I benefit from eating worm? These few questions and much more could be going on in your mind at the sight of this article.

To answer these few questions ~ It is a big fat YES from me! Yes, you can eat some types of worms but not all worms, it is safe to eat certain worms but not all worms, certain worms are healthy, certain worms are nutritious and there are several things you can benefit from eating worms. Well, one of such beneficial worms is the sago worm, which is equally known as coconut worm, palm tree worm, palm grubs, palmetto grub, palm tree weevil, edible maggot, Asian palm weevil, grugru, grew-grew or sago palm weevil.

Sago worm is the larva of the red palm beetle and since this is the case, another concern is if it is safe to eat insects? Yes, it is! Studies reveal that insects are highly valuable and essential source of vitamins and minerals such as calcium, protein, fat etc. Researchers and nutritionists also attest that certain edible insects have nutritional components that are comparable with that of fish and meat.

Since food security is presently posing a major problem in several underdeveloped and developing countries, many people are now resorting to alternative food sources. Several countries like Africa, South America, Mexico and Asia see insect-eating as a common practice because most of these edible insects are easily available for human consumption.

Apart from being a staple food source for most people, the sago worm is also a major source of income for many households especially the rural communities. Sago worm is the larvae of the red palm weevil, a species of snout beetle that is botanically known as Rhynchophorus ferrugineus. According to researchers, this insect belongs to the family of Dryophthoridae, subfamily Rhynchophorinae, and the tribe of Rhynchophorini.

According to researchers, this insect belongs to the family of Dryophthoridae, subfamily Rhynchophorinae, and the tribe of Rhynchophorini. The genus Rhynchophorus comprises of 10 species, with 7 of them such as Rhynchophorini ferrugineus and Rhynchophorini vulneratus attacking mainly palm trees, coconut tree (C. nucifera) and date palm (P. dactylifera).

Adult beetle measures approximately 2 to 5 centimetres long with a reddish rusty appearance. A weevil is a type of beetle that belongs to the Curculionoidea superfamily. Red palm weevil is native to tropical Asia before spreading to other parts of Africa, America and Europe. Adult Rhynchophorini palm weevil RPW measures between 30 to 40 mm in length. Weevil larvae normally bore holes in a palm tree, date palm, sugarcane or coconut tree trunk thus incapacitating and finally killing the host tree. This is part of the reason this insect is regarded as a damaging pest in a plantation.

Adult Rhynchophorini palm weevil RPW measures between 30 to 40 mm in length. Weevil larvae normally bore holes in palm tree, date palm, sugarcane or coconut tree trunk thus incapacitating and finally killing the host tree. This is part of the reason this insect is regarded as a damaging pest in a plantation. 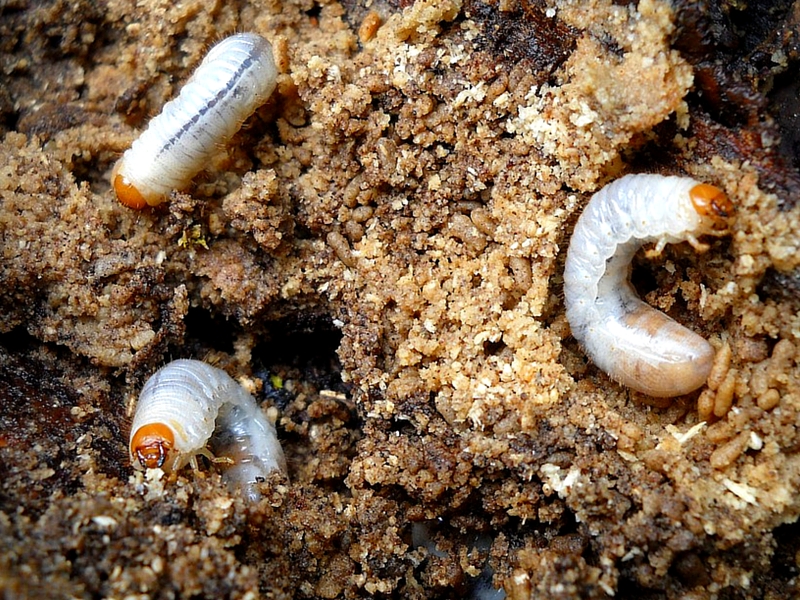 The shiny beetle egg is oblong in shape and creamy white in colour. It measures approximately 2.62 mm long and 1.12 mm wide. The larvae grow approximately 35 mm long and is distinguished by its white body and brownish head. The body is made up of 13 segments with the mouthparts being quite strong and properly developed.

Rhynchophorini weevils are distinguished by their ability to infest palm trees, date palm tree and coconut trees that are below 20 years of age. Even though the adult harms the infested trees by feeding on them, the major damages are manifested through the burrowing of the larva deep into the innermost parts of the infested trees. The adult females of Rhynchophorini RPW can lay up to 200 eggs at a time.

These eggs usually hatch into creamy colour legless larvae that feed on tree fibres and buds, burrowing through the inner tissues of the tree for approximately one month. Afterwards, the larvae move away from the tree to form cocoons that are made up of dry palm fibres at the base of the tree. When the larvae are about to metamorphose into the pupae, they produce an oval-shaped cocoon of fibre.

The prepupal stage usually takes about 3 days while the pupal period takes between 12 to 20 days. Pupae normally have a cream coloured appearance before changing to brown colour with a shiny surface. The pupae metamorphose into the adult weevils that are considered a major palm, coconut, date palm or sugarcane pest. The entire life cycle of Rhynchophorini RPW takes approximately 7 to 10 weeks.

Why Sago Worms are Essential

Have you ever wondered why sago worms are essential? Here are some incredible benefits of sago worms that will be of utmost interest to you.

It can also be coated with sago flour before deep-frying. Sago worm delicacies are equally served during events, ceremonies, festivals and special occasions. In Vietnam, the red palm tree grub is referred to as đuông dừa or coconut beetle-larva. The people usually eat the grub raw with fish sauce. 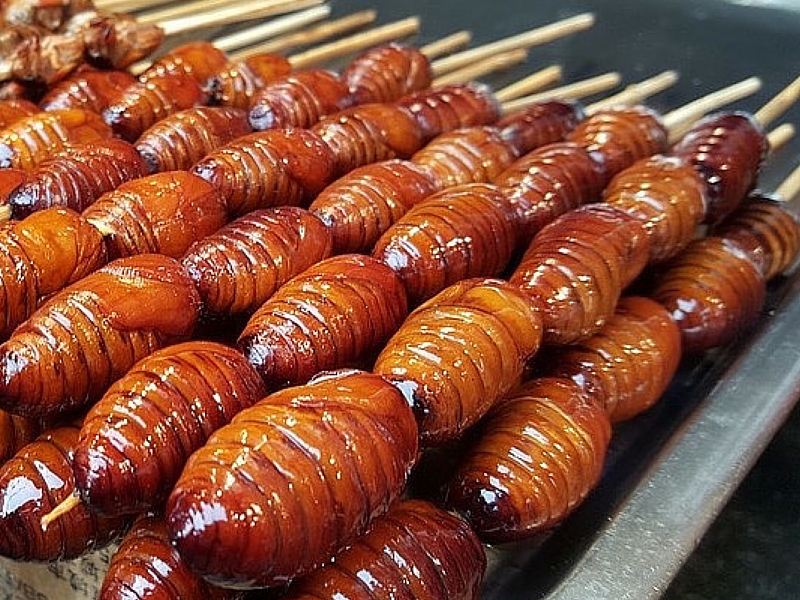 How to Prepare Coconut worms

To prepare coconut worms for cooking,
~ Soak the worms in a salt solution or brine for at least 20 minutes.
~ Drain and wash thoroughly in clean water.
~ Use knife to slit up the middle of the abdominal section so that the fat can ooze out. N:B Adopting this method is just to allow the worms to be cooked in their own fat.
~ Season the sago worms with salt and spices as desired.
~ Cook the worms as desired either by deep frying, roasting, boiling etc.
Sago worms usually change to brown colour if fried or roasted but remain creamy in colour if boiled or steamed.

They also conducted a similar analysis with the hemolymph of R. ferrugineus larvae infected by Pseudomonas aeruginosa (Schroter) Migula, Staphylococcus aureus Rosenbach and E. coli. The study revealed that there are polar substances present on the body of both adults and larvae of the red palm weevil. Thus they offer a protective barrier against microorganisms due to their antimicrobial properties.

Serve as Animal Feeds
Being rich in essential nutrients, the red palm weevil grubs can serve as animal feeds. They can also be used as bait for catching fish.

Aid Easy Digestion
Due to the high dietary fibre found in the red palm grubs, they can serve as a great source of dietary roughage. As a result, they aid easy digestion of food and helps to prevent constipation and flatulence.

Economic Benefits
Sago worms offer economic opportunities to some people especially in the underdeveloped and developing parts of the world. The worms are sold for income generation.

The major control method of this pest is by applying insecticide through a funnel above the infested part of the tree trunk. The weevils can also be trapped using pitfall traps or pheromone luring bucket.

Al-Barty and Hamza (2015), suggested an alternative method for controlling this pest. They investigated the larvicidal activity of titanium dioxide nanoparticles (TiO2NPS) synthesised from the aqueous extract of Moringa oleifera against the Rhynchophorus ferrugineus.

The motive behind their study was to ascertain the effects of Moringa oleifera on the glutamic oxaloacetic transaminase (GOT) and glutamic pyruvic transaminase (GPT) activities in tissue homogenates of Rhynchophorus ferrugineus larvae. Their findings showed that there is high mortality in the larval stage when this natural extract solution with titanioum dioxde nanoparticles at concentration 75 mg/L was applied. They concluded that TiO2NPS is suitable to be used alongside with Moringa oleifera extract against red palm weevil larvae.

HI THERE.. IT IS GREAT TO MEET YOU.. Cooking is a passion I developed at a very tender age from my mum and this online platform is where I aim to share and grow knowledge in all things cooking.
View all posts by Blessing Okpala →
HFB 5:The Scallion Plant and its Benefits
ASTONISHING BENEFITS OF GRASSHOPPERS