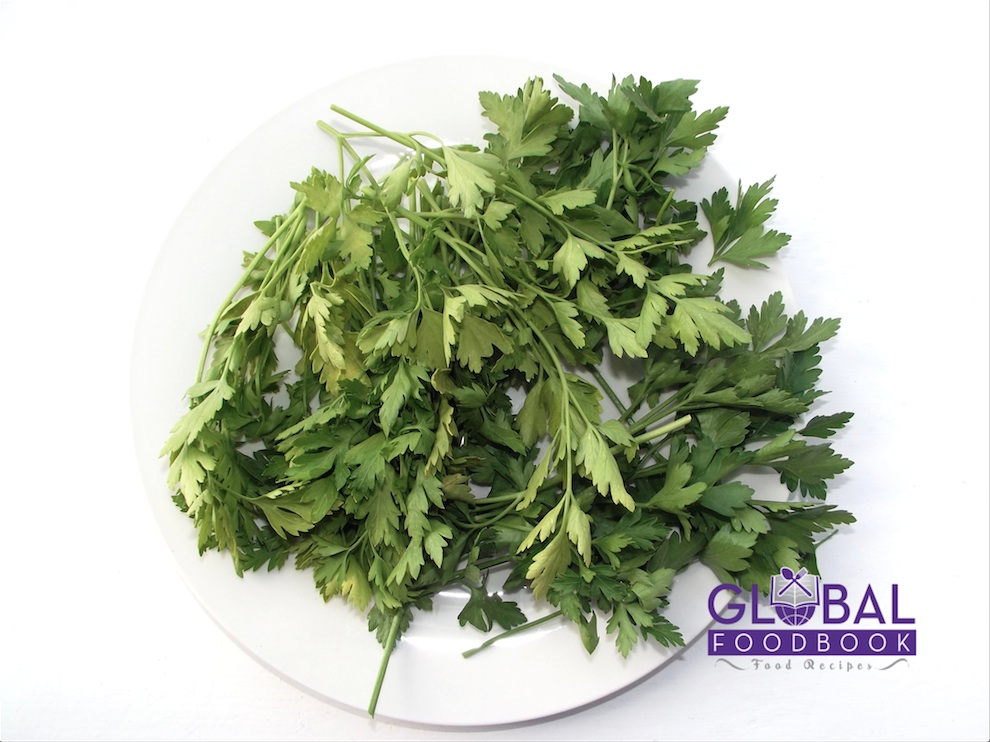 Parsley botanically known as Petroselinum crispum, a specie of Petroselinum belongs to the family of Apiaceae (Mangkoltriluk et., al. 2005). It is popularly cultivated as a herb, spice or vegetable. Parsley originated from central Mediterranean region before spreading to Europe and other parts of the World. Parsley grows as a green biennial plant in the temperate regions or as annual herb in subtropical and tropical regions. The seeds are ovoid with prominent remnants at the apex and they grow and thrive best in moist, well-drained soil, with enough sunlight.
The two types of parsley used as herbs are curly leaf (P. crispum crispum) and Italian flat leaf (P. crispum neapolitanum) Flat-leaved parsley is easier to cultivate and is more adaptive to both rain and sunshine with a better flavour while curly leaf parsley is best used in food garnishing due to its curly appearance.
A common type of parsley grown in southern Italy, has similar thick leaf stems like celery. Hamburg root parsley (P. crispum radicosumn) is another type of parsley grown as a root vegetable which produces much thicker roots than the other species cultivated for their leaves. This type is popular in central and eastern European regions and are rarely used in Britain and the United States. The root parsley has a similar appearance to the parsnip which is among the closest relatives of parsley in the family Apiaceae however, it's taste is totally different from parsnips.
Parsley can be used as a vegetable for cooking soups, stews, casseroles or as snacks. Parsley leaves are rich sources of dietary fiber,zinc, protein, riboflavin (B2), Vitamin k, vitamin A, thiamine (B1), niacin (B3), beta-carotene, lutein zeaxanthin, pantothenic acid (B5), vitamin B6, folate (B9), Vitamin C, vitamin E, calcium, iron, magnesium, manganese, phosphorus, potassium.
It's consumption is highly recommended however, excessive intake of parsley should be avoided by pregnant women to avoid causing harm to the unborn baby. It is ideal to consume normal quantity in food but due to it's uterotonic effects, large amount of parsley leaf is discouraged.
According to drugs.com, parsley is an emmenagogue with two substances known as myristicin and apiol, which are capable of  affecting the uterus thereby inducing menstruation and regulating menstrual flow in the treatment of amenorrhea and dysmenorrhea.. Parsley seeds can be used as a carminative to reduce flatulence and colic pain. The root is used as a diuretic and the juice for treatment of kidney ailments, gallstones and dysentery. The leaves can be used in treating skin parasites,tumors, insect bites and lice.
REFERENCES
Drugs.com http://www.drugs.com/npc/parsley.html
Mangkoltriluk W., Srzednicki G. & Craske J. (2005) Preservation of Flavour Components in Parsley (Petroselinum crispum) by Heat Pump and Cabinet Drying, Polish Journal of Food and Nutrition Sciences, Vol. 14/55, No. 1, p. 63.

HI THERE.. IT IS GREAT TO MEET YOU.. Cooking is a passion I developed at a very tender age from my mum and this online platform is where I aim to share and grow knowledge in all things cooking.
View all posts by Blessing Okpala →
LEMON RICE
RHUBARB YOGHURT